Bid to bring back Jho Low like clapping with one hand, says top cop

KUALA LUMPUR: The lack of sincerity by the authorities of the country that Low Taek Jho (pic) is hiding in is making it hard to get him back, says the Inspector-General of Police.

Tan Sri Abdul Hamid Bador said his outreach to his counterpart in the country over the fugitive businessman, also known as Jho Low, has been “disappointing”.

“We wrote the foreign authority a few times and even met them, but they have not been sincere with us.

“We told them that we had information that Jho Low was in their country but they refused to acknowledge the fact, ” he told a press conference after the handing-over ceremony for the Bukit Aman Logistics and Technology Department director's post on Monday (Dec 23).

Hamid described the effort in seeking the cooperation from the other country as akin to “clapping with one hand”.

“I am extremely disappointed with their lack of cooperation.

“I don't rule out the possibility that (if they seek our cooperation), they will be accorded the same treatment, ” he warned.

However, the IGP remained coy when asked to identify the country he was talking about.

“We have an extradition agreement with the other country, but they deny that Jho Low is even there.

“We have documents and records of his travels. We get better cooperation from other foreign agencies, ” he said.

Hamid added that Malaysian police have also obtained intelligence that Jho Low tried to purchase a few assets, including some in Cyprus.

“I vow to never give up in my efforts to bring him (Jho Low) to justice.

“We will also double our efforts to seize assets and items purchased using stolen funds, ” he said.

Hamid added that Jho Low's case is a matter of crime and not about politics.

“Given the advance technology that law enforcement agencies have, it is almost impossible for any criminal to hide, ” he said. 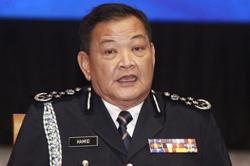