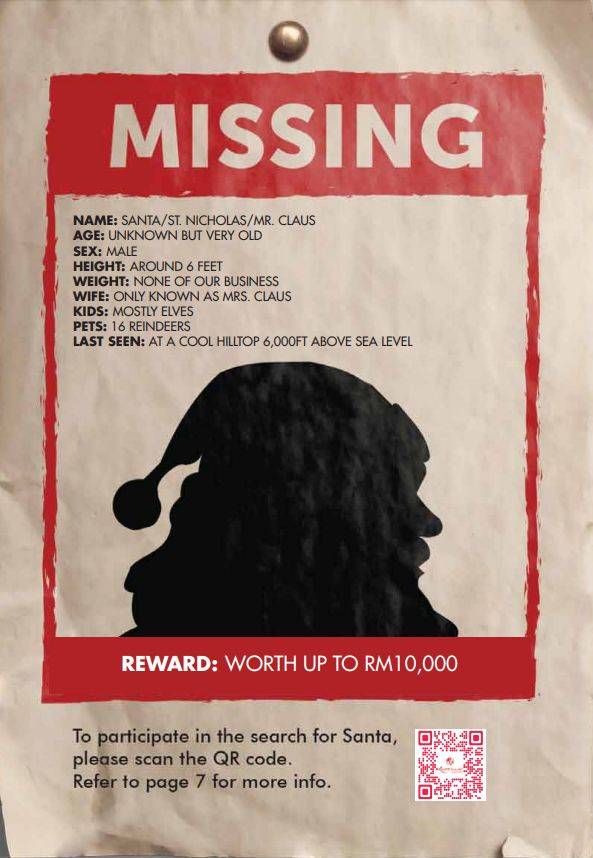 Where could he be?

Genting Winter Wonderland is happening and there is no time to spare!

Please help find Santa by getting clues from his trusted elves and reindeers.

Resorts World Genting promises you a huge reward if you succeed to save Christmas before time runs out.

Start your search for Santa at https://contests.thestar.com.my/winterwonderland/ from Dec 9 to 16.

Login using your Facebook account and you are on the magical quest in search of Santa through three levels of mini games, unlocking one after another.

Watch out for the timer ticking away, as time matters in all levels.

After completing the three levels, answer a simple question by telling us your most magical Christmas moment.

Participants with the fastest time will be in the running for the grand prize of an unforgettable VIP experience at Genting Winter Wonderland worth RM10,000 which includes a top-notch two-way VIP limousine service (pickup from the Klang Valley) and two luxurious Crockfords Hotel rooms for family of four, attraction passes and VIP pass for Imaginatricks.

Resorts World Genting is throwing the greatest Christmas party ever in a countdown to the most magical day of the year.

From now until Jan 1,2020, visitors can expect to be transported to an authentic Christmas wonderland with immersive magical decorations and an array of exciting festive events at the hilltop resort.

Under the stars and cool breezy weather

A 30-minute spectacular performance featuring Santa Claus, Elf, Reindeer, ice-skaters, The Broadway Choir Group, the Christmas Quartet and Genting’s Highland Heroes. The Christmas Light Up Show at 7.30 pm and Christmas Show at 10 am take place at the outdoor Metro Park.

Professional puppeteer and pioneer of children’s television entertainment including Disney, Nickelodeon and Cartoon Network, Brian Keith Zimmerman plays Santa Claus and will be on stage at Metro Park and SkyAtrium with an attentive Elf to thrill children.

Santa will also be performing with six international award-winning skaters an astounding choreographed routine at the ice rink.

The Christmas Light Up will be set against a musical backdrop of Malaysia’s Broadway Academy 15-member choir, a harpist and four Broadway singers from New York City, along with The Voice of Independent Brass Ensemble and Strings (V.I.B.E.S) band, featuring classic Christmas songs such as White Christmas, Jingle Bells and All I Want For Christmas Is You.

Hard to miss is the three-storey towering crystalline Christmas tree standing tall for a perfect family picture while visitors can head to the European Christmas Market for yuletide treats and that unbeatable festive feeling.

Nearby the Gazebo Garden is where visitors can indulge in delicious treats from nine food trucks and check out the beer garden and kiosks for Christmas puddings, cakes, pies, among others.

The special open-air area surrounding the lake located just off the Gazebo Garden is a great place to chill, where classic Christmas movies will be screened twice a day and live football matches to broadcast over the weekends.

All spruced up in pink and gold

Enter the Nutcracker’s Wonderland at the SkySymphony Stage where the area is decked out with a rotating carousel filled with golden presents and cheerful Nutcracker figurines complemented by glorious pink decorations and stunning creative displays.

This splendid scene will see a Christmas SkySymphony show - Snowball Express, created by Genting Studios, taking viewers on an enchanted ride to the North Pole with Genting’s Highland Heroes, featuring music from The Nutcracker. Energetic pop-up dance shows to follow at 3pm and 5pm at the Time Square Stage.

Just down the corridor is another set of spectacular Nutcracker figurines flanking a majestic golden organ and a choir of heavenly angels in the SkyAtrium, where a grand seat awaits Santa Claus. Meet Santa and sing along to Christmas carols performed by Broadway Academy at 12pm, 4pm and 6.20pm.

Over at the Park Avenue Lounge is a special appearance by Fivera - Thailand’s first classical crossover group - performing at 3pm and 5pm on Dec 10,11 and 12, at the Genting International Showroom on Dec 9 and at Genting Club at 10pm on Dec 13.

Allie the Elephant welcomes everyone to join her at Allie’s Courtyard between 10am to 10pm daily at Level G, SkyAvenue.

Allie’s Courtyard promises a fun playground and an opportunity to take home exclusive Resort World Genting Christmas souvenirs through a variety of exciting games including making crazy poses at the Be A Pin Up booth, strapping into a harness to collect plushies in the Tabby Giant claw Machine, catch falling sticks in Be Fast and Be Sharp Like Callie and avoiding shocks in the Geno Shake Shake No More challenge.

Allie’s Courtyard is open to guests who have purchased Theme Park Save Combo Tickets or have dined at Ed’s Diner or Medan Selera.

The Christmas Parade by the Highland Heroes will be marching through the Carnival several times a day while a flash mob hypes up the atmosphere.

Visitors can also get up close and personal with the Highland Heroes in a special meet and greet session daily at Allie’s Courtyard and SkyAtrium.