Dong Zong chairman Tan Tai Kim says the group is adamant that the school's board of directors must be given the right to decide whether Jawi calligraphy should be taught to pupils.

PETALING JAYA: Representatives from Chinese educationist groups Dong Zong and Jiao Zong had to wait for an officer to meet them on Friday (Nov 29) because they only gave an hour's notice before turning up, says the Education Ministry.

A Ministry officer said this was why the groups had to wait for over an hour to meet with representatives from the government to hand over a memorandum on the teaching of Jawi calligraphy to Year Four pupils.

"They told us at 2pm that they were coming at 3pm, the same time our top officers were attending a post-Cabinet meeting. It was never our intention to make them wait but with no appointment, what could we do," said the officer.

He added that a ministry official finally met them, adding that it took more than an hour due to the prior scheduled meeting.

"If we had sent someone lower-ranking, then they won't be happy," he said, adding that the educationist groups even brought the media with them.

On Friday, an online portal reported that the educationist groups had scheduled to submit a memorandum to the Ministry, but they were made to wait for more than an hour until an officer turned up.

Earlier this week, Dong Zong chairman Tan Tai Kim said the group was adamant that the school's board of directors must be given the right to decide whether Jawi calligraphy should be taught to pupils.

"We feel that the position of board of directors at SJKCs must be respected. We feel strongly dissatisfied that they have yet to be included among the decision-makers in introducing khat as part of the syllabus," he said after chairing two meetings in Kajang on Sunday, one with Jiao Zong and another with other Chinese associations.

Tan said during the press conference that they met with the Education Ministry five times but their concerns had not been taken seriously.

The Education Ministry has announced the introduction of khat in the Bahasa Melayu subject for Year Four students beginning next year.

The announcement caused an uproar among various groups, which prompted the Ministry to give teachers in schools the power to decide whether they want to teach the Jawi calligraphy to pupils. 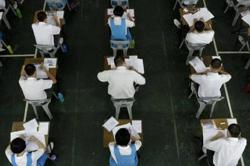