The award was handed out during the 8th Annual Cutting-Edge Conference in Miami on Nov 18, a gathering of the tunnelling fraternity to recognise and celebrate the best and latest in tunnelling achievements.

The A-TBM was named as finalist together with three other contenders from Italy, Australia and Switzerland. The innovation underwent two stages of evaluation by a panel of 17 expert judges chaired by International Tunnelling Association president Prof Jenny Yan Jinxiu.

As the world’s first automated system using artificial intelligence control algorithms that enable an unprecedented level of automation, the A-TBM’s brain monitors machine data in real time and assumes control of steering, advance rate, excavation rate and slurry sub-systems while freeing the human operator to concentrate on the most vital parts that may require manual intervention.

By utilising Industry 4.0 elements such as Big Data and the Internet of Things, the system has demonstrated faster response times, improved accuracy and tangible productivity benefits resulting in safer tunnelling.

The A-TBM is no mere theoretical prototype, and it was actually tested in the Sungai-Buloh-Serdang-Putrajaya (SSP) MRT line of the Klang Valley Mass Rapid Transit (KVMRT) project, which passes through four distinct geological formations of Kuala Lumpur. 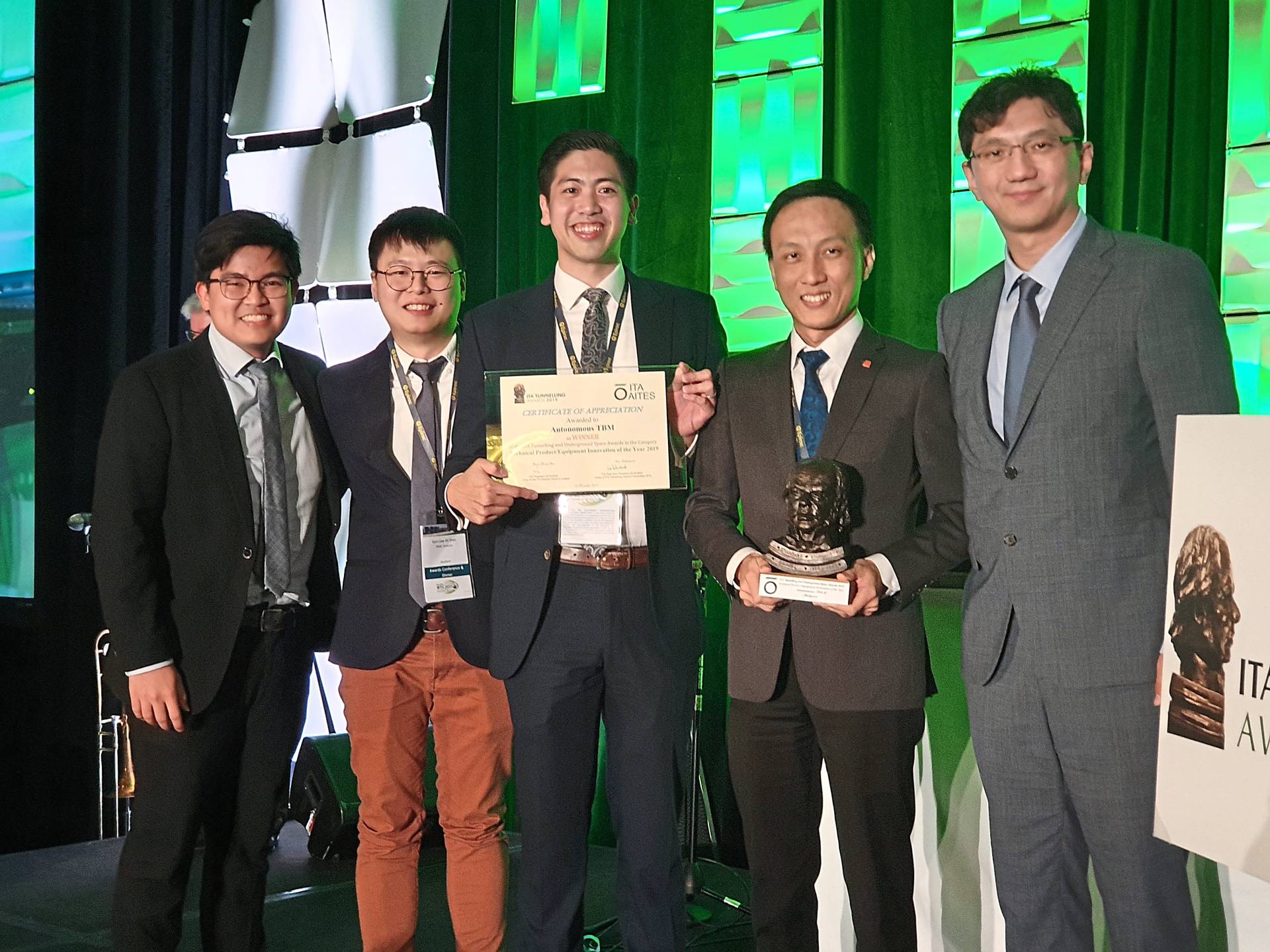 Chin (centre) and Ng (second from right) with their team members after receiving the award in Miami early this week. Other inventors of this system include (from left) John Lim Ji Xiong and Liew Kit Shen. On the far right is ITA executive council member Hangseok Choi.

With MMC Gamuda as the main work package contractor, the autonomous system was deployed into eight TBMs, where all related mining drives this year have been successfully completed with minimal incidents.

At the presentation ceremony to receive the award from ITA was MMC Gamuda deputy project director, Ng Hau Wei, who said: “Our tunnelling team has poured a lot of sweat and tears into the innovation and overcome so many seemingly insurmountable road blocks to get to where we are today. This award goes to all the Malaysians out there who trusted us to deliver the Sungai Buloh-Serdang-Putrajaya MRT project safely with the use of technology.”Given its short history in tunnelling, Malaysia was hardly viewed as a tunnelling superpower. However, a closing remark made at the end of the conference in commending the team of young, dynamic engineers from Malaysia as true innovators of tunnelling in today’s world has definitely made an indelible impression of Malaysia on the global delegates. With the eyes of the world upon us, the A-TBM continues to drive the tunnel progress on the SSP Line 2 project, where mining works are scheduled for completion by the second quarter of 2020.

Also present to introduce the A-TBM to the audience consisting of over 300 tunnelling experts was acting tunnel general manager Justin Chin, who was more than happy to share the details behind the innovation to enrich the global tunnelling community.

“We’re ecstatic that we could bring home this award for MMC Gamuda and Malaysia just two years since we started the A-TBM project. Clearly, the tunnelling industry is primed for another technological breakthrough, and we’re proud to be leading the way,” said Chin.
Article type: metered
User Type: anonymous web
User Status:
Campaign ID: 1
Cxense type: free
User access status: 0
Subscribe now to our Premium Plan for an ad-free and unlimited reading experience!