The two were at the Parliament lobby with Tajuddin trying to leave when Dr Ismail started shouting profanities at him.

Tajuddin, the Pasir Salak MP, turned around and said “Apa, apa (what, what?)”.

The two then traded insults and even dared each other to a fight.

“Nantilah I lawan kau (I will fight you). You are so stupid, ” said Dr Ismail as he walked towards Tajuddin.

Two security guards intervened, with one trying to calm Dr Ismail down while the other held Tajuddin back as they were both heading towards a corridor near the lobby.

Dr Ismail, who later retreated back to the lobby, was calmed down by Umno secretary-general Tan Sri Annuar Musa and Arau MP Datuk Seri Shahidan Kassim.

Dr Ismail was heard telling Annuar and Shahidan that it was Tajuddin who started the fight.

The duo was believed to be fighting because Tajuddin had allegedly posted a picture of Dr Ismail’s daughter on social media, claiming that Dr Ismail was rallying support for another leader.

“It was a picture of my friends visiting my sick daughter (in hospital), but he (Tajuddin) turned it into an issue and said I was trying to form an alliance to support another leader, ” he told reporters at the Parliament lobby, without elaborating further.

Tajuddin, who returned to the lobby later, refused to explain the reason behind their disagreement, saying that it was just a misunderstanding between two friends.

“Friends ... and it’s resolved. Why are you all so interested?

“It was a misunderstanding between friends, ” he said.

Where have all the MPs gone? Parliament struggles to make quorum 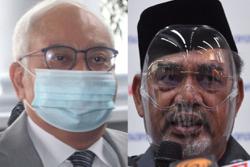