Walking between the Pasar Seni LRT/MRT stations and KTM's Kuala Lumpur station (as well as to the National Mosque) is now more straightforward with the new bridge across Klang River.

KUALA LUMPUR: Regular LRT, MRT and KTM Komuter users who need to make transfers at KL Sentral can do so seamlessly now at Pasar Seni.

The fully covered bridge is equipped with a bi-directional travelator which spans 50m.

This link also enables users to reach Masjid Negara and its vicinity such as Taman Tugu easily as it shortens the walking distance.

Work had commenced in April 2016 as part of requirements for the Sungai Buloh-Kajang (SBK) MRT line.

However, crossing the Klang River to get to the KTM Kuala Lumpur station still proved to be arduous with users having to walk a long route via Menara Dayabumi.

The scope of work included improvements to the Pasar Seni LRT station concourse, as well as the entrance to Menara Dayabumi nearby.

“Seamless connectivity is an important element in public transportation, and without it, people will lose interest in using the service, ” he said.

“The bridge is also designed in such a way that it will enable ticketing integration between the MRT/LRT systems with the Komuter system in future.

“We hope that this last mile barrier in terms of fare integration will be solved one day, ” he said.

The ownership, operation and maintenance of the bridge will fall under Prasarana Malaysia Bhd. 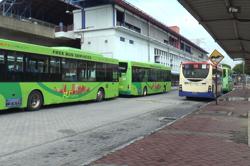