The heat is on: Police looking for clues at the home of MBI founder Yeow.

GEORGE TOWN: Penang police are looking for three men, believed to be Chinese nationals, who had hurled fake bombs at a house in Bukit Gambir.

He said that police had also found fingerprints on a water filter and a perfume bottle at the crime scene.

In a statement released by the police, during the 7pm incident on Monday, Adrian Teow, 28, who is the son of MBI Group International founder Tedy Teow, saw three men attempting to enter his house at Tingkat Permai 2, Bukit Gambir.

ACP Che Zaimani said that upon reaching the house entrance, the men told Adrian to open the door.

One of them then pointed a knife on the left side of Adrian’s abdomen while another man, who spoke in Mandarin, told Adrian, who is Vouk Hotel managing director, that they only wanted their money back.

ACP Che Zaimani said that one of them told Adrian that his father Tedy had cheated many MBI investors.

“The victim told the men that they had to look for his father as he did not know anything about the investment and that he was only responsible for managing the hotel.

“The victim had also denied that he was responsible for taking care of the investment money owned by his father,” ACP Che Zaimani added.

He said the men, however, continued to threaten Adrian by saying that they knew his background and his family’s whereabouts in Kuala Lumpur.

“They were adamant and kept insisting that the victim return their money. They had also asked the victim to surrender his handphone for them to access a certain cryptocurrency app, forced him to register with some websites and even ordered him to buy bitcoin,” he said, adding that all the attempts failed.

He said the men had also asked Adrian to transfer all his money from his account and when this failed, they told him to call his father. The call, however, did not get through.

“To avoid being harassed further, the victim suggested that they call his mother’s driver-cum-bodyguard.

“When the driver picked up the call, Adrian screamed for help and told the driver to save his mother

“The suspects then tried to escape with a bag but a scuffle ensued between them, Adrian and the driver,” he said, adding that the men, who took Adrian’s handphone, left the scene in a blue Proton Axia.

Investors up in arms after fall of MBI 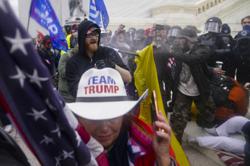