She said Jakim would conduct investigations into the claims diligently and would come down hard on any wrongdoing.

"I promise we will protect the whistleblower's identity as we are really concerned about the integrity of Jakim's halal certification process," said Fuziah after launching the Ekspo Rahmah 3R Pak Mahat here on Saturday (Oct 26).

Jakim director-general Datuk Mohamad Nordin Ibrahim refuted the allegations, saying the department had a control mechanism and adopted a high-standard, transparent system of integrity, as well a code of conduct to prevent corruption among its employees.

In a follow-up article published on Friday (Oct 25), the news portal alleged that Jakim wished to cover up any misdeeds rather than undertake inquiries.

However, Fuziah questioned Asia Sentinel's integrity, saying she had doubts over the portal's intentions and claimed she had received information that Asia Sentinel's offices in Hong Kong and Canada had shut down.

She added that they had used the wrong photo of Jakim's director-general in their latest article.

"The photo used is that of past director-general Tan Sri Othman Mustapha and not that of Mohamad Nordin. They already got that wrong, so how can we be sure that their allegation is correct?" she asked.

Fuziah also said she was worried there was an agenda to tarnish the integrity of Jakim's halal certification.

"What we said to Asia Sentinel's writer was that the onus was on him to provide the proof. He cannot just make the accusation without proof.

"When we said that, it did not mean we would not be doing our own inquiries into the matter," she said. 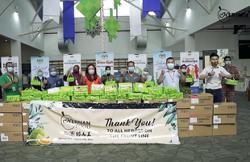