PETALING JAYA: Several businessmen and political leaders were presented awards for their achievements at the 30th World Hakka Conference, the second time the gathering was held in Malaysia.

Altogether, five Global Outstanding Hakka Personality Awards and 21 Outstanding Malaysian Hakka Awards were dished out yesterday for those who contributed significantly to society.

It has been two decades since Malaysia last played host to the biennial World Hakka Conference.

The grand affair saw thousands of Hakka from all over the world gather to promote cultural exchange and economic cooperation.

Federation of Hakka Associations Malaysia (FHAM) president Datuk Steve Chong Yoon On, who delivered a brief speech in Hakka, said that versatility was a strong trait among the Hakka.

“The biennial conference has come a long way since its inception almost half a century ago.

“I call on everyone to be versatile as said in the Chinese idiom san tou liu bi (literally to have three heads and six arms).

“Let us keep adapting to be greater while staying relevant with the passage of time and strive to keep our tradition alive, ” he said.

Chong, who is also the organising chairman of the conference, said the grand event was testament to the uniqueness of the Hakka community.

“Malaysia is home to about 1.8 million Hakka, and this is one of the largest Hakka populations in the South-East Asia region.

“Hosting this event is a great show of strength and unity.

“It also portrayed our determination in promoting the Hakka way of life and culture in a sustainable manner to the world, ” he said.

Themed “The World Hakka: Sustainable and Prosperous”, the three-day conference includes a cultural extravaganza featuring a grand gala dinner with Nanyang Hakka folk performances, music, exhibitions and a host of other activities.

Prime Minister Tun Dr Mahathir Mohamad, who launched the conference 20 years ago, was also invited to do the same yesterday.

However, he could not make it, and instead, shared a video message to launch the conference.

“It is indeed nostalgic, if not deja vu, for me to pen some thoughts for the 30th World Hakka Conference.

“Malaysia won the bid to host the conference this year and here I am again invited to officiate it, just like what I did two decades ago.

“Much water has flowed under the bridge during the 20 years.

“The world has transformed and so has Malaysia, ” he said, adding that the way business, trade and other economic activities are conducted needs to be revitalised with new inputs, ideas and approaches. 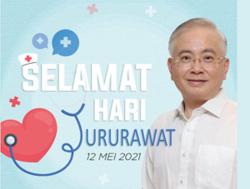