KUALA LUMPUR: Finance Minister Lim Guan Eng was told to keep his promise to give RM1,000 to all Tunku Abdul Rahman University College (TAR UC) students after Pakatan Harapan took over the government.

Ayer Hitam MP Datuk Seri Dr Wee Ka Siong made the call when debating Budget 2020 in Parliament, reminding Lim of his promise during a campaign in Kampar, Perak, before the May 9 General Election last year.

"If everyone will get RM1,000, I will give the list of all 28,000 TAR UC students to him. If there are 159 DAP lawmakers, they can queue and visit the students and hand them the money. I am willing to see this for the good of rakyat.

"I am firm that the money should be given by the government as promised. If not, it is just a ploy to win votes," said the MCA president on Monday (Oct 14).

Dr Wee also reminded Lim that he had promised Pakatan would take care of TAR UC and Universiti Tunku Abdul Rahman (UTAR) students if Pakatan took over the Federal Government irrespective of their political affiliation.

"Lim had further said that it should be remembered that many DAP MPs and state assemblymen were also graduates of TAR UC.

"If you hate MCA, the money is not going to MCA, but to the university," said Dr Wee.

"It does not matter if Lim does not want to acknowledge me, but please keep your promise," he added.

In Budget 2020, TAR UC was denied a matching grant for a second year running and also seeing allocation for development expenses slashed from RM5.5mil in Budget 2019 to RM1mil.

On a separate matter, Dr Wee questioned the implementation of the mySalam protection scheme, claiming that equity under the scheme was given to a foreign country, namely Singapore.

The scheme was first announced during Budget 2019.

It provides coverage for 3.8 million Malaysians and is a collaboration between Great Eastern Holdings and the government, with the former contributing RM2bil to the trust fund.

The scheme for the B40 group provides a one-off/lump sum payment of RM8,000 to those eligible if diagnosed with any of the 36 critical illnesses like cancer, heart disease and Alzheimer’s. 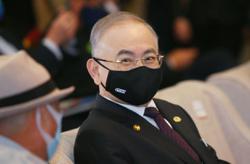