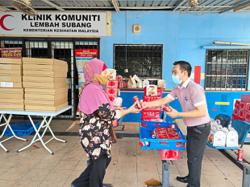 PETALING JAYA: Experts are lauding the Women@Work initiatives announced in Budget 2020 aimed at increasing the participation of women in the workforce.

Among the goodies for women in the newly-announced Budget 2020 were a RM500 monthly incentive for two years for women aged 30 to 50 who return to work; a RM300 hiring incentive each month for two years for employers; extended income tax exemptions for women returning to work until 2023; and a proposed increase in maternity leave from 60 days to 90 days for the private sector.

The Women's Aid Organisation (WAO) said that the incentives would contribute towards more women having financial independence.

“We are excited to hear about the Women@Work incentives for women and companies, to encourage and enable women to return to work.

“Such support is especially important for domestic violence survivors who are rebuilding their lives and working towards financial independence, ” said WAO's executive director, Sumitra Visvanathan on Friday (Oct 11).

She said that WAO was also happy with the amendments to the Employment Act.

“We are pleased that some positive amendments to the Employment Act have been announced.

"This includes increased paid maternity leave; improved sexual harassment protection; and prohibition of discrimination on the basis of gender, race, and religion, ” she added.

Harvindar, who is a managing partner for Harvey & Associates, said that the incentives could encourage more women to re-join the workforce.

“Women have a lot to offer in nation-building, but due to matters such as taking care of children, they may opt to give up their career.

“These incentives would allow the affected women who return to work to have more disposable income and it is hoped it would spur more of them to return to the workforce, ” he said.

Institute for Democracy and Economic Affairs director of research Laurence Todd welcomed the initiative to include more women in the labour force.

“For such initiatives, it is welcome and it will be effective in making it easier for women to return to work, ” he said.

However, the All Women’s Action Society (AWAM) said while the incentives seemed “promising”, more needs to be done.

Its infocoms officer Lochna Menon said that long-term initiatives needed to be put in place to encourage more women in the country's workforce.

“AWAM applauds the thought that went into Budget 2020 in consideration of women.

“While we note the progress, it is still not enough, ” said Lochna.

She added that there should be allocation for women to be able to further their studies in Master's or PhD in Science, Technology, Engineering and Mathematics (STEM) subjects in the budget.