KUALA LUMPUR (Bernama): Members of the public are advised not to panic if they were to see Royal Malaysian Air Force (RMAF) aircraft flying low near the Petronas Twin Towers beginning Friday morning (Oct 11).

The RMAF said in a statement that all its aircraft would perform a fly-over in conjunction with the Lima Joint Exercise involving RMAF-owned Hawk 108 and four units of the Royal Air Force-owned Typhoon aircraft.

"The fly-over will be carried out at 10.15 am tomorrow morning.

"Members of the public are told not to panic and fear if they saw the jet fighters flying low throughout the period stated, ” the statement said. – Bernama 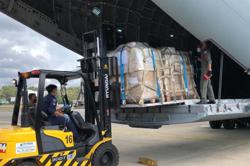