Prime mover: A vehicle carrier refuelling at a diesel pump. The costs to maintain such vehicles will increase if the diesel subsidy is removed, say hauliers.

GEORGE TOWN: With some 150 companies operating about 5,000 prime movers in the northern region, the Association of Malaysian Hauliers has expressed concern over possible changes to the diesel subsidy scheme.

The main worry will be the effect on consumers if the subsidies are removed, as prices of goods will go up, said the association’s northern region chairman R. Amaiappan

“We are already faced with high cost of spare parts due to the value of the Ringgit.

“If the diesel subsidy is removed, our cost of transportation will definitely increase, and so will the price of goods delivered.

“Consumers are the one who will suffer and we hope the government will look into that factor, ” he said.

In Kota Kinabalu, a politician slammed the federal government for leaving Sabah, Sarawak and Labuan out of the targeted fuel subsidy scheme.

“The argument that Sabah, Sarawak and FT Labuan are enjoying the price of RM2.08 for RON95 is not acceptable.

“Why stay at RM2.08 if consumers in Sabah, Sarawak and Labuan could enjoy more subsidy?” he asked in a statement.

Under the new scheme, the price of RON95 will float and eligible recipients will receive between RM48 (motorcycle) and RM120 (car) every four months.

Saifuddin said 2.8 million people would benefit from the subsidy scheme, which will cost the government about RM65.4mil a month.

Meanwhile, Bernama reported that national car models, namely Proton and Perodua, are expected to be the key beneficiaries of the fuel subsidy programme.

He said this was based on the estimated maximum allowable monthly loan commitment of RM1,200 as the maximum income for the BSH recipient group is RM4,000 per month.

“We anticipate a gradual increase in demand from first-time car buyers and two-wheeler owners in the BSH recipient group for the below 1.6 litre models, ” Hafriz said.

Subsidy for 1 car per person 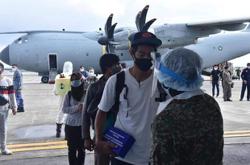