E-hailing drivers in a jam

By ASHLEY TANG and ALLISON LAI

PETALING JAYA: E-hailing drivers have two new requirements to fulfil if they want to be on the road from this Saturday, prompting concerns of a rush to meet these additional conditions before the deadline.

In May, Transport Minister Anthony Loke Siew Fook said e-hailing drivers would have the flexibility of not changing their vehicle category.

Chong yesterday said e-hailing drivers who have already obtained their Public Service Vehicle (PSV) licence should be allowed on the road after Saturday’s deadline despite them not having met the latest conditions yet.

“We hope the government can give at least one month grace period to comply with these new requirements, ” he said, explaining that a majority of e-hailing drivers who have obtained their EVP do not have the hard copy.

He said e-hailing operators would not have problems printing out the EVP for their drivers “but the drivers will have problems picking up the EVP from their respective companies in such short notice”.

Grab embeds the EVPs electronically through the driver’s app while other e-hailing operators issue both electronic and hard copies.

As for the conversion to AH, Chong said drivers would have to go through the process of filling up forms and submitting them to JPJ.

“This is another time-consuming procedure, with less than five days to do so, ” he said.

This Saturday is the deadline set earlier by the government for drivers to comply with all e-hailing regulations, including getting their PSV licence and EVP.

Initially, the deadline was July 12 but the Cabinet deferred it to Oct 12 to give more time for the drivers.

There are about 167,000 e-hailing drivers in Malaysia. Chong reckoned that 30% of them would quit.

In a statement, Grab said they had targeted 150,000 of its e-hailing drivers to obtain the PSV licence before the deadline.

It noted that 38% of its drivers have obtained their PSV licence while 13% have passed the government regulatory exams and are awaiting their licence.

Another 13% have completed their PSV training but were waiting to take the PSV exam.

Grab also said 14% of its drivers are in the process of completing their PSV training while 22% of their drivers have dropped out of the regulatory process.

MCA Civil Society Coordination Bureau chief Ng Kian Nam expressed concern about the number of drivers who have yet to receive their EVP document despite being PSV compliant.

“Many drivers who have already gotten their PSV licence complained to us they were still waiting for the issuance of EVP, which has to be applied from each e-hailing company should a driver work for multiple platforms, ” he said.

“Why is the authority taking so long to issue it?”

On the government’s announcement requiring drivers changing their vehicle category to AH, Ng cautioned that such a last-minute flip-flop decision may cause another round of shortage of drivers come Saturday.

‘Have more initiatives to encourage use of public transport’ 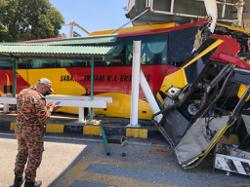