KUALA LUMPUR: A "faulty" ATM card led to the arrest of seven men believed to be behind illegal loan scams in the city.

Kuala Lumpur deputy police chief Deputy Comm Datuk Roslan Bek Ahmad said police tracked down the suspects as soon as they received a report from a saleslady, who borrowed money from the syndicate.

“She claimed to have been cheated by the group after discovering that she could no longer withdraw funds from her account, ” he said at a press conference at the city police headquarters on Thursday (Sept 12).

DCP Roslan said the victim had initially borrowed RM1,000 from the syndicate, which reportedly had been in operation for about six months, in July.

She was instructed to open a bank account to deposit the monthly instalments.

She was also ordered to surrender the ATM card linked to the account to the syndicate on the pretext that the group would then be able to access the payments.

However, the group returned the ATM card to the victim a few months later claiming that there was something wrong with it and they could no longer access payments.

“When she checked with the bank, she discovered that her account was frozen because of suspicious transactions and lodged a police report on Sept 5, ” he said.

DCP Roslan said police would continue to investigate the bank account, which they believed was manipulated for illegal activities like money laundering and phone scams.

Among those arrested was a 28-year-old man in Jinjang, who is believed to be the head of the syndicate.

Police also nabbed another man, 26, in Bandar Baru Sri Petaling, who is believed to be the collector of ATM cards from the victims.

Five other suspects, aged between 21 and 42, were arrested in Taman Sri Indah, Cheras.

“Early investigations show that the syndicate could be behind 11 more cheating cases in Selangor, Kuala Lumpur, Kedah, Pahang, Penang and Sarawak, ” he said.

The case is being investigated under Section 420 of the Penal Code for cheating and dishonestly inducing delivery of property. 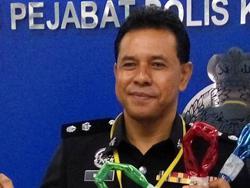