PUTRAJAYA (Bernama): The National Registration Department (NRD) has denied allegations that Kepong DAP is planning to register MyKads for illegal immigrants from China as claimed in a viral video on social media.

In a statement issued today, NRD said it was an old video with a wrong message that people who did not have Malaysian citizenship status, but had temporary and permanent identity cards, were rushing to the Kuala Lumpur City Hall office to change their citizenship status.

The programme which had been organised by the Kepong DAP parliamentary office at the end of 2018 was only to provide information on the ways of applying for citizenship and identity cards from the NRD.

"That day, there was nothing about applying, and the NRD advised those present to go to the nearest NRD office to apply for citizenship and identity cards, ” it said.

The NRD also urged the public to stop spreading the video to avoid any further confusion which would affect public order.

It said legal action could be taken against any person for spreading untrue information.

For further information, the public could go to any NRD office or check the NRD official website, www.jpn.gov.my or contact the Corporate Communications Unit at telephone number 03-8880 7077/ 7067/ 7069/ 8206 or email to pro@jpn.gov.my.- Bernama

MyKad issued to Chinese nationals? No such thing, says NRD 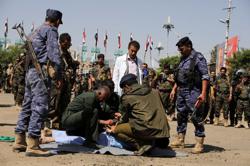