All ready to bridge Pahang and Terengganu for ECRL

Ready for project: An official showing the temporary steel bridge that will be used to support construction equipment deployed to build a pair of rail bridges to the right of the temporary bridge, which runs across Sungai Kemaman.

KEMAMAN: Work to span Sungai Kemaman, the longest river in the northern stretch of the East Coast Rail Link (ECRL), is ready to commence once regulatory approval is obtained.

In a site inspection on Wednesday arranged by the contractor, China Communications Construction (ECRL) Sdn Bhd (CCCECRL), the media was brought to see the temporary steel bridge that has been completed across the 180m-wide river near Kampung Binjai.

While the water body is less than 200m, the permanent pair of concrete bridges that will eventually be built will span 524m in order to provide a relatively level path for the railway, which is designed to provide passenger service at speeds of up to 160kph and cargo service at 80kph.

A total of 17 pile caps (pillars) will also be built to support the pair of bridges, which will collectively be known as the Kemaman viaduct, which is also the river closest to the Terengganu-Pahang border.

The Kemaman viaduct will be the vital link between Terengganu’s Chukai station and Pahang’s Cherating station.

The viaduct is located within Section 5 of the ECRL, which is divided into eight sections over 644km from Kota Baru all the way to Port Klang.

According to an ECRL spokesman, building the Kemaman viaduct will be challenging as the depth of the river can vary by up to 6m, depending on tidal conditions and rainfall.

“The average level is about 4m, but it can rise up to 10m, and therefore, the viaduct has to be built 15m above the riverbed to make it flood-proof, ” said a CCCECRL spokesman.

The deepest part of the riverbed is about 9m from the ground surface, compounding the challenges to the contractor who also has to make provisions to allow for small fishing boats to sail past safely during viaduct construction, which should be completed by August 2022.

Section 5 is rather undulating, and to smoothen the journey, embankments and viaducts will form 87.3% (72.3km) of the alignment.

There will also be a single tunnel measuring 2.866km for this section near Kuantan. 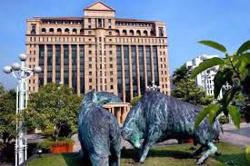 Timely shot in the arm