PETALING JAYA: The oldest Malay newspaper in the country will be laid to rest tomorrow with the cessation of all its print and online publications.

All publications under the Utusan Group – Utusan Malaysia, Mingguan Malaysia, Kosmo!, and Kosmo! Ahad – will cease following a sustained period of financial uncertainty.

The news was conveyed during a meeting between staff and Human Resources Ministry personnel yesterday as about 100 of its employees picketed outside its office in Jalan Chan Sow Lin, Kuala Lumpur.

“The directors told us they have no money left to pay any of us. We were also told that we will be closed on Wednesday although there is yet to be anything in black and white from management,” said Taufek.

The decision was made by the board of directors at a meeting earlier yesterday, and sources said the closure would be finalised once the group had been de-listed from Bursa Malaysia.

A meeting between executive chairman Datuk Abdul Aziz Sheikh Fadzir, who holds 31% of Utusan Group’s shares, and the staff will be held today. Umno currently holds 19% of the media group’s shares.

The Utusan Group has not paid its staff any salary since June. Even before this, it had repeatedly delayed salary payments.

Salaries for executive staff were also delayed for two months, with the last partial payment of RM2,000 being done in June.

This is despite it having initiated a voluntary separation scheme (VSS) that saw its staff cut from 1,400 to 823. However, even the VSS payments have been delayed.

In an announcement to Bursa Malaysia yesterday, the group admitted that it could not submit its regularisation plan within 12 months of being listed as a PN17 company.

“The board is of the view that the group will not be able to meet Bursa’s requirements to uplift the PN17 status. It is also not able to find any potential investor to participate in order to revive the group, mainly due to its huge liabilities,” it said. Sources said the board of directors had approached former finance minister II Datuk Seri Johari Abdul Ghani to help in finding a solution and turn around the newspaper.

“However, he has already committed himself to turning around KUB, of which he is now a major shareholder. He was of the opinion that the business model of Utusan was not sustainable.

“However, he further told us that it is always a good idea to try to turn around Utusan Malaysia as the newspaper still holds sentimental value among the Malays,” said the source.
Article type: metered
User Type: anonymous web
User Status:
Campaign ID: 46
Cxense type: free
User access status: 3
Join our Telegram channel to get our Evening Alerts and breaking news highlights 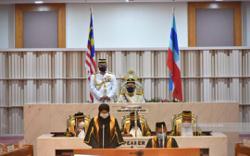