KUALA LUMPUR (Bernama): A witness told the High Court here that the fugitive businessman Low Taek Jho informed her that Datuk Seri Najib Razak did not want to close his accounts with AmBank.

This was revealed by 48-year-old AmBank former relationship manager Joanna Yu Ging Ping during cross-examination by lawyer Harvinderjit Singh on the 48th day of the former prime minister's trial in relation to the misappropriation of RM42mil of SRC International Sdn Bhd’s funds.

Yu confirmed the transcript of the conversation between she and Low,which was read out in court on Monday (Aug 5) by Harvinderjit.

Harvinderjit: On Dec 20,2014 you pushed Jho Low to close Najib's accounts and he responded "asked MNR (Mohd Najib Razak),he does not want to close".

The court previously heard that the senior management of AmBank at the end of 2014 proposed and discussed closing Najib’s current accounts as they were constantly overdrawn and the bank often had to wait for adequate funds to be deposited in order to clear cheques issued by the former premier.

Yu also said she did not suspect anything amiss during her dealings with Jho Low.

Harvinderjit: Would you agree if during the time you dealt with Jho Low,you had a very strong suspicion that he did not communicate with the account holder (Najib),and you would raise it to the bank.

Yu: I would have raised it to (former group managing director of Ambank Group) Cheah Tek Kuang.

Harvinderjit: And you would have been very,very reluctant to deal with Jho Low on matters relating to the accounts (Najib’s accounts)?

Harvinderjit: But you didn’t get that strong suspicion. Not until at least 2014,2015.

Yu: When we told him (Jho Low) to close the (Najib’s) account.

The witness also agreed to a suggestion by Harvinderjit that in a span of one day,an amount of RM5mil was transferred from a construction company,Putra Perdana Development Sdn Bhd,into Najib's MY account ending with 906.

The RM5mil transfer was meant to necessitate a cheque issued from the 906 account,causing some RM3mil to be overdrawn.

Yu also said Low had asked her to reverse transfers of RM27mil and RM5mil into the accused's AmBank account ending with 880 and 906,in 2014. 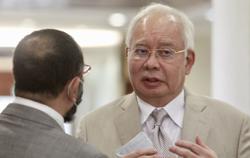