KUCHING: The Federal Government and relevant agencies should implement automatic voter registration in time for the next Sarawak state election due in two years' time, says a Sarawak-based civil society organisation.

Persatuan Pemangkin Daya Masyarakat (ROSE) said lowering the voting age to 18 and automatic voter registration would increase the number of registered voters in Sarawak from 1.22 million during GE14 last year to 2.04 million.

"This is an increase of 820,000 from the roll as at GE14. We thus call on the Pakatan Harapan government and relevant agencies to ensure implementation of automatic voter registration and the other amendments in time for the coming 12th Sarawak state elections due in 2021," ROSE president Ann Teo said in a statement on Wednesday (July 17).

She congratulated the Dewan Rakyat for unanimously passing a Bill to amend the Federal Constitution on Tuesday (July 16) to lower the voting age, allow automatic voter registration and lower the minimum age for elected representatives to 18, saying this would increase youth participation in Malaysia's democracy.

"Now the responsibility and the job lie with the experts in the agencies concerned, like the Election Commission, National Registration Department, police and Armed Forces to sort out the technicalities and roll out and implement the changes in the law," she said.

Teo also said it was equally important for young people to know their democratic rights and roles as citizens and voters.

"For real enfranchisement of the young, it is imperative for relevant agencies and stakeholders to deliver comprehensive voter information and education, including civic and citizenship education starting from secondary school," she said.

As a next step, she called on the Federal Government to conduct another delineation exercise of constituencies in accordance with the provisions of the Constitution.

This needs to be done to address the issue of malapportionment in electoral constituencies as well as the increase in the electoral roll by as much as 7.8 million voters nationwide, she said. 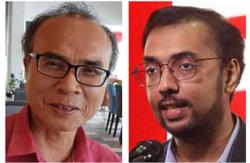