PETALING JAYA: The Malaysian Trades Union Congress (MTUC) and the Malaysian Employers Federa­tion (MEF) voted against an international treaty to promote a harassment-and-violence free workplace because a section in the document includes the LGBT community.

In a list of countries voting for the adoption of the Convention Concer­n­ing Elimination of Violence and Harassment in the World of Work, MTUC was shown as the sole union in the world against the treaty.

MEF and employer representatives from Costa Rica, the Dominican Republic, El Salvador, Guatemala and Singapore also voted against the treaty.

The ballots were cast during the International Labour Conference in Geneva on June 21.

Malaysia’s government representatives abstained from voting and the Human Resources Ministry is ex­pec­ted to issue a statement on the matter soon.

Governments, employers and workers’ representatives from 439 countries voted in favour of the treaty.

MTUC president Datuk Abdul Halim Mansor said it wanted to remain consistent with the country’s stance of not recognising LGBT.

MEF executive director Datuk Shamsuddin Bardan said there were enough laws in the country to promote the eradication of sexual harassment and violence in the workplace.

“Even without ratifying the treaty, we are already against harassment and violence.

“The LGBT community will be treated fairly,” he said adding that there were already talks to strengthen the Employment Act 1955 to deal with such matters.

Meanwhile, a source with knowledge of the issue was puzzled by the decision of the two bodies and questioned the nation’s seriousness about creating a workplace free from harassment and violence.

“If they are serious about (tackling) violence and harassment in the workplace, why would they not support the adoption of the convention,” said the source who is also a workers’ rights advocate.

The source added that even the government, employers and workers’ representatives from Saudi Arabia voted in favour of the treaty.

All Women’s Action Society ex­pressed its extreme disappointment over the decision by MTUC and the government for not voting for the treaty.

“Ensuring that women feel welcome and safe at the workplace is a serious concern – not only from an economic point of view but also to ensure that women earn a living wage and are able to make financial decisions independently.

“There is no point in creating a quota/opportunities for women if basic requirements like a violence-free and harassment-free workplace are not realised,” it said in a statement. 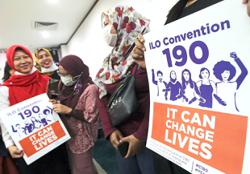 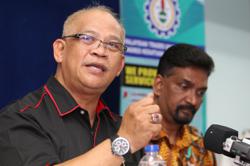