Food to ‘fly’ into Cyberjaya soon

Food on the go: Hamdee holding a package of successfully delivered food via ‘Express Food’ drone (inset) at the MyDroneX expo in Cyberjaya. — Bernama

CYBERJAYA: Residents here will be able to enjoy food delivery service right at their doorstep with the help of drones by the end of this month.It would take 12 minutes for the food to be delivered once an order is placed, said Hamdee Hamdan, the chief executive officer of Average Drone Sdn Bhd, a local company involved in the drone industry since 2014.

The company will collaborate with Futurise which is managed by Cyberview, a subsidiary firm under the Finance Ministry.

Hamdee said the current plan was to have the food delivery service over a three-month trial period.

The food would be delivered within a two-kilometre distance of the Futurise building here, he added.

Only seven types of food will be offered during the trial period, including noodles, rice, burgers, sandwiches, kuih and fruits. 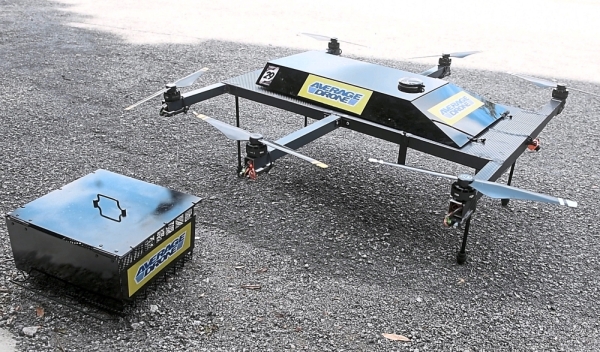 “This is only a test run and after three months, we will see how it goes and add more dishes on the menu,” said Hamdee when met at the MyDroneX expo here on Monday.

Hamdee said the company had also developed a mobile application that was still in the final draft stage, to facilitate customers in ordering their food.

The duration from the time the order is placed until the time the food reaches its destination should take no more than 12 minutes, he said, adding that delivery charges would cost RM2.50 per trip.

“Is not so much about the price, it is also about the time frame since many want quick delivery.

“We have developed the drone so that it could be flown during rain, but not in situations when there are heavy rains,” he said.

Hamdee said that the six-propeller drones, aptly named “Express Food” and manufactured by the company, were able to accommodate a weight of up to 800g.

“If the response is good and the trial project a success, our plan is to then modify each drone to accommodate a weight of up to three kilogrammes,” he said. — Bernama