Speaking to the media shortly after Haziq was released from custody at Dang Wangi police station at 5.45pm Saturday (June 15), Ramesh said his client has no travel restrictions.

"The investigating officer informed me that Haziq will not be remanded as we had feared but is being released on police bail instead.

"He can go anywhere without restrictions but if they need him to come back then he will return to cooperate," he said.

Ramesh added that his client was cheerful and in good spirits and had cooperated fully with the police.

"Based on his ticket, he was to fly to Manila.

"The investigation will be conducted under Section 292 (sale of obscene material), 504 (intent to provoke breach of peace) and 377B (carnal intercourse against nature) of the Penal Code, as well as Section 233 Multimedia and Communication Act 1998," he said in a statement Friday.

It is learnt that Haziq was arrested at KLIA at around 5.30pm. 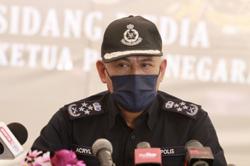