Socso aims to be foolproof

KUALA LUMPUR: Having been hit with RM30mil in losses as a result of false claims stretching back seven years, the Social Security Organi­sation (Socso) has decided that enough is enough.

It is now training its guns on syndicates and other third parties putting in false claims on behalf of contributors.

Investigations showed that there are syndicates operating to influence contributors to exaggerate their injuries for them to stand a better chance of claiming life-long benefits.

Of these, 48 were reported to the police with 10 arrests made.

As of Jan 1, two cases were brought to court, one of which involved a syndicate leader. 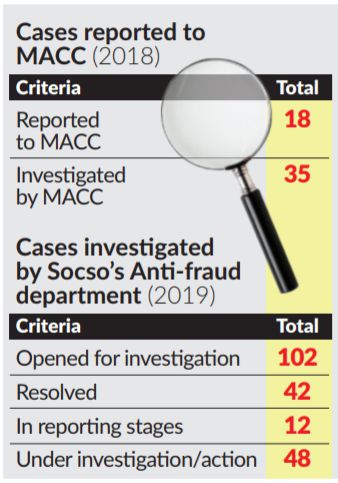 Overall, Socso, which provides social security protection to a 6.3-million-strong workforce (excluding foreigners) and their dependents through the Employ­ment Injury Scheme and the Invalidity Scheme, has identified about 200 false claims, some of which date back to 2012.

Besides ordering an audit trail, CEO Datuk Seri Dr Mohammed Azman Aziz Mohammed disclosed that Socso was looking at introducing an online system for claims with all applications, approvals and payments handled “with minimal intervention”.

“We hope to get it done by the year end and have it running next year. I am pushing my staff members on this.

“We hope this will put an end to any third party interference,” he said in an interview at his office here yesterday.

Mohammed Azman said of the 200 claims, 145 were referred to the police, Malaysian Anti-Corruption Commission and other bodies.

Cases were also filed in court, he said.

“Third parties will instigate contributors and tell them that they have to do certain things to get their claims approved.

“This is what we have known from our experience.

“Our stance is that all claims are genuine until proven otherwise.

“If you want to challenge the system, be prepared to face the consequences,” he said.

Mohammed Azman explained that as Socso claims were handled by employers, contributors or their dependents need not rely on third parties or runners.

He said in the event of a mishap, an employer need only prepare a report and submit the claim to Socso.

He said the majority of claims were approved as long as they were certified by employers, adding that the necessary arrangement for payments was done accordingly by Socso.

“But somehow in some cases, a third party is involved to facilitate the claims.

“They use all sorts of excuses to convince the contributor that if they go through them, approval will be expedited because they claim to know someone in Socso.

“These runners then try to get a cut from the contributors or depen­dents,” he said.

Mohammed Azman explained that the processes involved were straightforward and as such, there was no need for outside help.

“People should think twice when anyone comes and tells them that they can help get Socso claims approved,” he said.

He challenged the notion by some that Socso was an organisation muddled with red tape, adding that the body had been proactive in reaching out with its “Skuad Prihatin” (caring squad) to contributors in need of assistance.

“Even cases reported in the media, as long as we get their MyKad numbers, we cross-check with the system and if they are registered with us, we are there to help. So why go through middlemen?” he asked.

Mohammed Azman said Socso held its open day every Tuesday (8.30am to 10.30am) at all its branches nationwide and welcomed those who have doubts or problems to seek help.

“I have given directive to all office managers and state directors to be present to entertain queries.

“This is also applicable at the headquarters and my deputy or me also have to be at the counters to provide assistance,’’ he said.