PETALING JAYA: It's been a year since the general election, but many of our politicians are still in full swing fighting foes and attracting supporters not just personally but online on social media channels including Facebook.

The Star's analysis shows that 86% or 191 of the 222 Members of Parliament have active official Facebook pages maintained with regular updates, statements and other information.

The former and current Prime Minister rank first and second among the 222 MPs in terms of the number of "likes" their pages received from Facebook users.

For uniformity, the analysis only looked at data from the official Facebook pages of the country's MPs.

However, the picture does show that Najib and Dr Mahathir have been in the lead since 2009, the year Facebook introduced the "like" button on its website.

"Our politics has always been personality driven, centred on leaders including Dr Mahathir, Najib, Anwar and others such as Khairy, who was an early adopter of social media to reach out to younger Malaysians," said Merdeka Center's programme director Ibrahim Suffian.

Najib and Dr Mahathir have the two most "liked" official Facebook pages, but they are not the most prolific in terms of the number of postings.

That record goes to Anwar, whose official Facebook page contains a total of 6,274 postings since the page was set up on May 5, 2008 - three days before the country's 12th general election.

"For voters who can't have face to face communication with politicians, social media channels - such as Facebook - offers a direct channel of engagement," said Prof Sivamurugan Pandian of Universiti Sains Malaysia. A case in point was Dr Mahathir's May 8 speech last year in Langkawi - on the night before polling began for GE14. The live broadcast drew a staggering 3.4 million viewers on Dr Mahathir's Facebook page.

Najib's "Malu Apa Bossku" campaign, its rapid growth in popularity driven by the former prime minister's social media channels including his Facebook page, is another example. 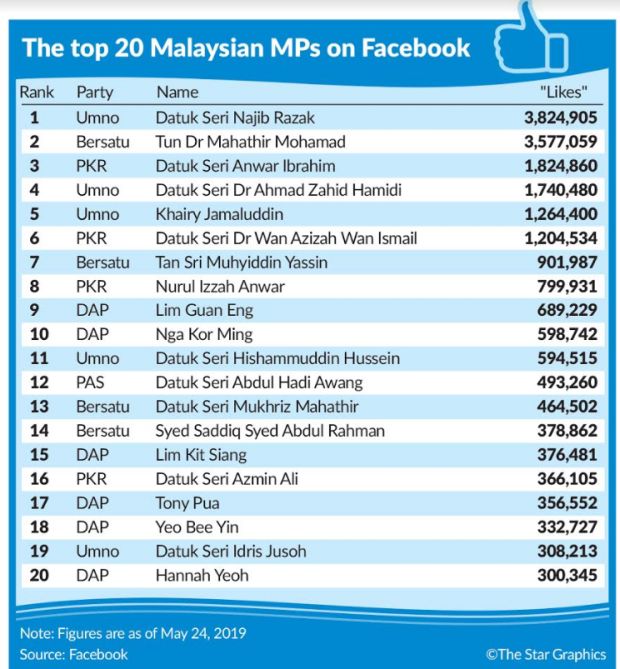 However, being popular on Facebook may not tell the whole story.

"The number of likes is one indicator (of support), but it is not necessarily a good one as it might be possible to manipulate this," said Dr Cassey Lee, Senior Fellow and Coordinator of the Regional Economic Studies Programme at the ISEAS-Yusof Ishak Institute in Singapore.

In the run-up to GE14, Reuters reported how automated accounts, known as bots, flooded Twitter with tens of thousands of pro-government and anti-opposition messages, raising questions whether some of our politicians were buying fake support on social media.

On Thursday, Facebook announced that it had removed more than three billion fake accounts from October last year to March.

Lee, who wrote a paper in 2017 - which studied the social media presence of Malaysian politicians - reckoned that it's possible that fake support would be a problem in the run-up to GE15.

"That is why we should go beyond just number of followers or likes. My preference is to look at the number of comments and shares as additional data," Lee said.

Despite his number one position, in terms of likes, Najib's "Bossku" charm did not work in the Sandakan parliamentary by-election despite his visit to the constituency to indirectly help PBS. The party ended up losing to Pakatan Harapan.

In addition, while Dr Mahathir is the second most "liked" politician on Facebook, his popularity as tracked by polling firm Merdeka Centre via a series of surveys has dropped from 83% shortly after GE14 to 46% nearly a year later.

"Voter support is not static, so the number of likes a politician gets on Facebook should be considered as a snapshot, not the whole picture," said Ibrahim.

For the data set used for the analysis, click on the following link: https://bit.ly/2Hz5kr4