Engaging in all that takes flight

KUALA LUMPUR: The Malaysian Aviation Commission (Mavcom) has just turned three and many are still unclear about what it does and often; there is a misconception that Mavcom’s role overlaps with the Civil Aviation Authority of Malaysia (CAAM) and even that of the Transport Ministry.

It has received a mixture of praises and brickbats, comments on what it should and should not do. Despite all the noises, Mavcom tirelessly strives to strengthen the Malaysian aviation industry through its role as the regulator for economic and consumer affairs of the industry.

The Star spoke to Mavcom’s executive chairman Dr Nungsari Ahmad Radhi about the regulatory body and how it has grown over the three years.

For starters, Mavcom is an economic regulator, overseeing economic and consumer matters. It acts as an independent adviser to the Transport Ministry on economic matters pertaining to civil aviation. 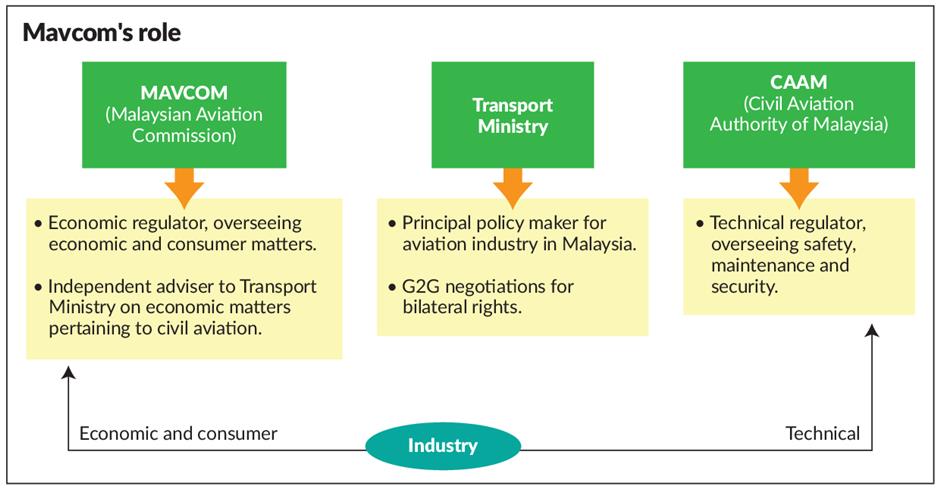 The ministry is the principal policy maker for the industry and is responsible for government-to-government (G2G) discussions, which include spearheading bilateral or multilateral negotiations on air traffic rights.

CAAM on the other hand, acts as the technical regulator, overseeing safety, maintenance and security.

Nungsari said it was the industry that clamoured for an independent regulator as the government has always been deemed as wearing too many hats as far as the industry is concerned.

This was in the environment where the government owns the airports, Malaysian Airlines (MAS) and the government is in control of the Department of Civil Aviation (DCA, as CAAM is formerly known) and the DCA decides on everything including airports, licenses and traffic rights.

“Otherwise, I’m the owner, I’m the policy maker, I’m the regulator and I’m also the enforcer. So, that’s why there is a need for separation.

“As the government decided to liberalise the ownership, then clearly non-government players come in, and if Malaysian airports are being privatised in that sense, then government cannot be the owner, policy maker and regulator.

“That’s why the players themselves asked for an economic regulator that is independent of the government,” he said.

Nungsari added that there is a certain newness to the fact that Mavcom is an independent economic regulator and for it to operate in a somewhat novel institutional arrangement, having certain parties raise their dissatisfaction over something unfamiliar is not surprising.

Mavcom has since issued five half-yearly consumer reports, and there has been a noticeable increasing trend of complaints filed with the commission.

Nungsari said this reflects improved awareness levels among consumers and Mavcom would actually like to see the number of complaints grow. “If it grows because people are more aware, then it’s okay. If everybody who travels is aware, then the quality level of the complaints should go up as well. This means that quality has improved.

“But we also like to see some tapering off. That means the supply side would have improved, resulting in fewer complaints,” he said.

The consumer report for the period July to December last year saw an 11.7% increase in complaints to 821, as compared to 735 for the same period in 2017.

Mishandled baggage, processing of refunds and flight delays made up 51.6% of the total complaints. Mavcom resolved 99.6% of the 821 complaints, where 55% involved airlines reversing their earlier decisions for a resolution in favour of consumers.

Amendments to the MACPC, which will come into force on June 1, will see the regulation of hidden charges by airlines being addressed, among others.

Airlines will not be able to specify separate fees for services or amenities apart from the approved Passenger Service Charge (PSC) and relevant taxes.

All other charges the airlines choose to impose on passengers will need to be incorporated in the overall ticket price and not specified as a separate fee, such as processing fee for bookings and the conventional counter check-in fee.

Works for the regulated asset base (RAB) to determine the PSC are expected to be completed by this year. Mavcom plans to make the PSC basis transparent by the third quarter this year.

The golden question of course, is whether rates will go up or down. That will then depend on the viability of the airport, its traffic and the asset volume.

Mavcom is currently determining the basis of returns for investors, such as the government, will get from the PSC for their heavy capital expenditure on the airports.

The PSC could be further reduced depending on the “generosity” of the government in not claiming back the bits of their expenditure.

The rates are currently standardised at RM73 for international flights beyond Asean countries, RM35 for Asean and RM11 for domestic flights.

“The PSC is an airport funding model and it is what consumers pay for using the airport.

“Having the RAB means it has to be benchmarked or based on the amount of expenditure put in place to serve the passenger.

“The fear is that all PSC will go up. That’s not the case. I think for airports that are heavily used like Penang, Langkawi and Kota Kinabalu, chances are it will go down,” Nungsari said.

Allowing the court to decide the outcome of the ongoing spat between the low cost carrier and the airport operator is what rule of law is all about, said Nungsari.

He explained that while the Mavcom Act 2015 stipulates that Mavcom can play an arbitrary role, it has to be a mutual decision of the parties in the dispute.

In the case of AirAsia and Malaysian Airports Holdings Bhd (MAHB), Nungsari said Mavcom can only step in when both parties come forward voluntarily to get it to be the arbitrator.

“People ask us why we did not prevent AirAsia and MAHB from getting into the dispute. When you have a statutory regime that Mavcom is, the philosophy of it is an independent regulator within the government, so we are still subject to government policy.

“The independence also exposes us legally, where people can take us to court and investors actually like that. They like to take regulators to court if they deem themselves to be unfairly treated.

“People say they like transparency, separation of power and division of authority but what it entails sometimes becomes unfamiliar,” he said.

AirAsia Bhd and AirAsia X Bhd recently filed a judicial review application to compel Mavcom to adjudicate the disputes between the two airlines and Malaysia Airports (Sepang) Sdn Bhd, a unit of MAHB.

While Mavcom has taken note of the judicial review, it has yet to be served with any legal documentation on the matter.

The dispute is over the PSC and the poor level of service at KLIA2.

still expect to have a global footprint.

With short haul flights now becoming commodities rather than a premium operation, Nungsari said it is vital for MAS to find out what kind of airline it really is, or wants to be.

“The proliferation of low cost models is the recognition that short hauls are commodities.

“Long hauls, due to the nature of the operations and the cost of the assets and asset turn, are tougher. Long haul means a slight premium and a totally different game,” said Nungsari.

He added that like most heavy capital expenditure businesses such as automobile and airlines, there has been consolidation globally.

Having close to 30% of the Malaysian market share, MAS is being watched closely by Mavcom.

“We also need to be cognisant of the industry changes and recognise what are the emerging business models,” he said.