KUALA LUMPUR: A gang of drug pushers failed to avoid the long arm of the law after the police arrested their leader and a few others.

“Acting on information obtained, police arrested a 22-year-old man along Jalan Persiaran Segambut Utara on May 9.

"Checks on his car led to the discovery of about 75.02g of what we believed to be ketamine,” said city police chief Comm Datuk Seri Mazlan Lazim at a press conference in the state police headquarters on Tuesday (May 14).

Following his arrest, the suspect led the police to his home on Jalan Ipoh, where more drugs were seized.

And after he was interrogated, police made follow-up arrests the next day.

Raids were conducted on a condominium along Jalan Ipoh and a residency on Jalan Sungai Buloh.

The gang leader, aged 39, were among those arrested. Police also recovered a Glock handgun and a magazine filled with 15 bullets.

In total, the police seized over RM440,000 worth of drugs, with the illicit goods ranging from ketamine to Erimin 5 pills.

“The suspects are aged between 22 and 53. So far, we don’t believe that they are involved in any secret societies because the gang preferred to remain under the radar.

"Our men worked hard in rooting them out,” he said.

Drug tests on all four arrested suspects came back positive.

It is believed that the group mainly operated in the Sentul area. They sold their illicit goods within the Klang Valley area.

Investigations are still ongoing to track the remaining members of the gang.

In an unrelated case, the police arrested two suspects in a tinted van who tried to escape a police check in Dang Wangi last week.

The police were forced to fire at the speeding car after the driver tried to reverse into a policemen on duty.

The two were arrested on May 9 and checks showed that both had criminal record.

Referring to the attack of an entertainment outlet in Scott Garden on May 3, Comm Mazlan said Datuk Seri Liow Soon Hee had yet to report to the police.

Instead, Liow had his lawyer meet the police.

Previously the police announced that they were looking for four men to assist their investigations into the attack. One of the man named by the police was Liow.

“Yes, his lawyer approached me and I said there would be no compromise. Either he comes to us or we will have to make an arrest.

“I take this case very seriously.

"While we have asked the four to present themselves to the police, at the same time, we are looking for them,” he said. 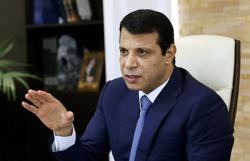 Palestinians arrest supporters of Abbas rival based in UAE