KUALA LUMPUR: Cheques issued by an Ambank account belonging to former prime minister Datuk Seri Najib Razak were spent on upgrading works of his private residence including a storehouse and plumbing worth more than RM150,000, the High Court here was told.

Sixth prosecution witness, interior designer Zulkarnain (one name only), 46, testified that he had been hired to build a storehouse at a home in Jalan Langgak Duta, between end 2014 and early 2015.

DPP Muhammad Saifuddin Hashim Musaimi: Did you know whose house this was?

Zulkarnain: They told me it was the house of Mr Number One, Najib. I said I was unworthy but (Najib’s residence manager) Amirul Hadi said I could do it.

His company ABS Trend Master Sdn Bhd was paid a RM50,000 deposit, with the remaining paid after completing the three-month long project.

This included building a storehouse with a dry kitchen, clothes cabinet and pantry, plus repairs to the garbage disposal area and guard house.

Asked by defence counsel Tan Sri Muhammad Shafee Abdullah if the storehouse could have been to store the then-prime minister’s official clothing, Zulkarnain said he did not know but added it could fit a lot of clothes with two 12-foot wide closets.

The seventh prosecution witness, plumbing company owner Mohammad Zakariyya Zearat Khan said he was hired to install a 12,000 litre water tank, due to the house having frequent water disruptions.

Asked by Muhammad Shafee if he recognised Najib, Zakariyya turned to the dock and pointed, then said loudly: “That’s him,” causing the courtroom to burst into laughter.

Earlier in the day, the fifth witness, AmBank cheque processing centre senior manager Badrul Hisham Mohamad, 42, confirmed that 17 cheques worth nearly RM30mil were issued by several AmBank accounts, including those linked to Najib and SRC International Sdn Bhd. Among those cheques were two made out to ABS Trend master for RM100,000 and Moz for RM56,500, both on Feb 12, 2015. 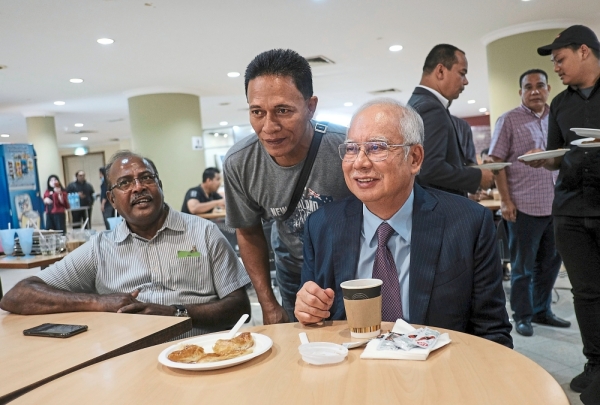 One for the album: Najib having a meal at the food court of the court complex in  Kuala Lumpur. —Bernama

During a break, DPP Muhammad Saifuddin Hashim Musaimi told reporters that only the account belonging to SRC International identified the issuer, though the other account’s owners had not been adduced in court yet.

However, the other accounts had been linked to Najib via charge sheets and the prosecutor’s opening statement.