PUTRAJAYA: The entry of six former Umno men into Parti Pribumi Bersatu Malaysia has changed the numbers game in Parliament with the Pakatan Harapan government now just 13 seats shy of a two-thirds majority.

They were formally accepted into Bersatu yesterday.

Prime Minister and party chairman Tun Dr Mahathir Mohamad presented them with their membership cards at a simple ceremony after a closed-door meeting at the Perdana Leadership Foundation.

The six quit Umno on Dec 14 last year. Before this, three other Umno MPs who quit the party had also joined Bersatu.

In the 14th General Election, Bersatu won 13 seats for Pakatan Harapan, which had 113 seats to form the government.

The government bloc now consists of 135 seats including Pakatan-friendly parties Parti Warisan Sabah (nine) and Upko (one), leaving it short of 13 seats to form a two-thirds majority in Parliament.

Dr Mahathir said the six new party members joined the party not to seek protection for “their past doings”. 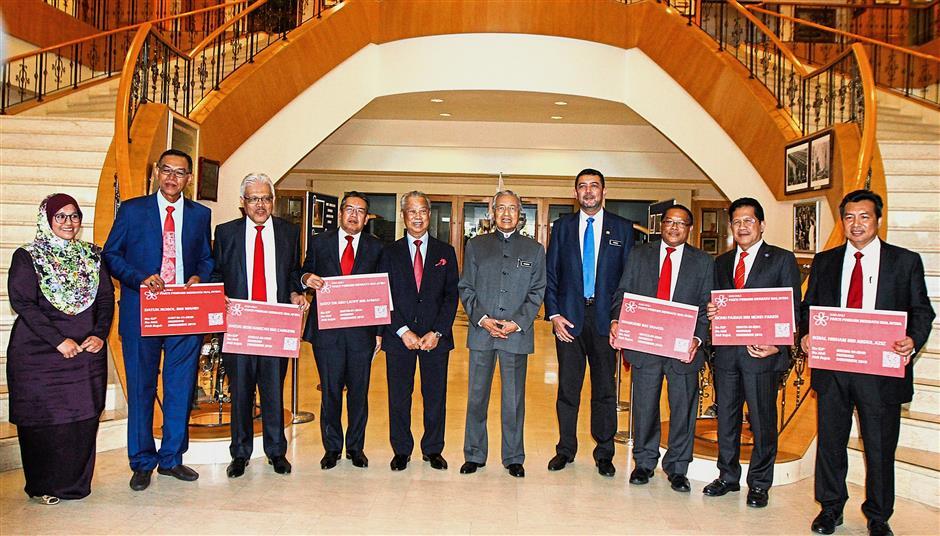 “We are not giving them protection. If there is a case, there will be a case,” he told reporters.

He also reiterated that those who joined the party would not be given posts but might be assigned specific duties due to their experience.

This could include helping Bersatu and Pakatan campaign in elections, he said. “I have briefed them on what Bersatu stands for and they understand the party’s struggles. They have given their commitment and loyalty to the party as well as to Pakatan,” he added.

Hamzah, who had served as Domestic Trade, Consumerism and Cooperatives Minister during the Barisan Nasional administration, dismissed suggestions that he and the rest joined Bersatu to get benefits from the new government.

“Do you join any group to get benefits?

“None of us is asking for a post and Tun (Dr Mahathir) has mentioned that there will be no posts for us. We are just ordinary members,” he said.

Asked if he would convince other Umno members to join Bersatu, Hamzah said: “This is not about convincing people but to get them to understand the struggle.”

Ikmal Hisham believed that his constituents would understand the need to adjust to the current political situation, adding that his association with Bersatu would bring more development to the area.

“I want to contribute to Bersatu’s cause and will be helping the party as well as Pakatan to campaign for the Semenyih by-election,” he said.

Rosol, who is now the first Pakatan MP in the PAS-led Terengganu, said he would work hard to persuade other Umno members in the state to join Bersatu.

“My relationship with Bersatu members in Terengganu so far has been good. Hopefully Pakatan has a better chance of winning in the state in the next election,” said Rosol.