PETALING JAYA: The most recent edition of the Star Outstanding Business Awards (SOBA) 2018 saw Senheng Electric (KL) Sdn Bhd clinching seven awards, including the coveted Malaysian Business of the Year Award (for companies with an annual turnover of above RM25mil).

The homegrown electronics retail chain was awarded gold in the Best in Marketing, Best Brand, Best in CSR and Best Employer categories and platinum in Best Innovation and Best Use of Technology categories (above RM25mil) during the SOBA 2018 Awards Night, at the New World Hotel Petaling Jaya yesterday.

Senheng Electric (KL) Sdn Bhd managing director Lim Kim Heng was also awarded for Outstanding Achievement under the Entrepre­neur of the Year (male) category (for companies with an annual turnover of above RM25mil).

Another big winner was Secret Recipe Holdings Sdn Bhd, which won platinum in Best in Marketing and Best Brand, while its group president and chief executive officer Datuk Sim Leong Thun was awarded the Par Excellence Achievement award under the Entrepreneur of the Year (male) category (for companies with an annual turnover of above RM25mil).

Prof Muhaya Eye and Lasik Centre Sdn Bhd emerged as the winner for Malaysian Business of the Year for companies with an annual turnover of less than RM25mil.

This year’s winners of the Rising Star awards, for companies that have been set up for less than three years, were LNN Design Sdn Bhd, who was crowned the grand winner, and We Build Easy Sdn Bhd, another design studio, received a special mention. 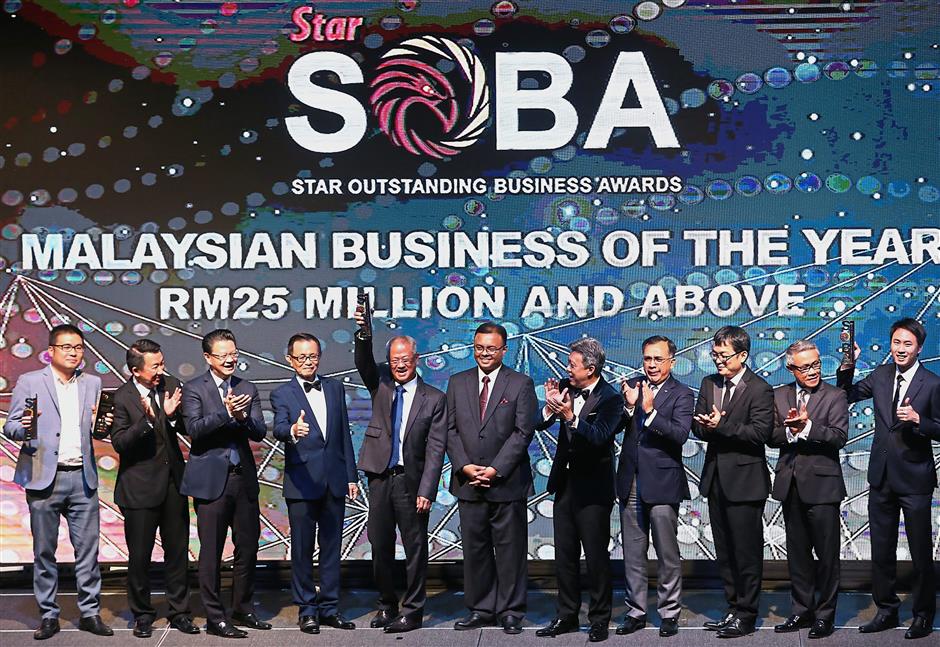 Star Media Group Bhd chairman Datuk Fu Ah Kiow said SOBA 2018 winners showed the spirit of resilience despite it being a challenging year for the country’s businesses and despite the fast-changing local and global business climate.

“Digital technology has caused far-reaching changes in such a speed that we have never experienced before,” he said in his speech, adding that it had impacted all the aspects of doing business, including how companies engage with their customer base.

He said Malaysian companies needed to embrace digital technology, lest they be left behind.

He added that this was why a new category, Best Use of Technology, was introduced this year.

He said SOBA was introduced to promote business excellence and encourage healthy competition among local small and medium enterprises as well as encourage SMEs to aim higher.

“We have reported on many of your successes and kept a close watch of trends and patterns, so we can keep you abreast (on these). This is what we do best.

“But we also realise we can do more,” he added.

SOBA pays tribute to SMEs stri­ving to carve a niche for themselves in the world of business.

The awards aim to inspire and drive Malaysian enterprises towards excellence and outstanding achievement, with the hope that those who are awarded a SOBA will look towards listing on the Malaysian Stock Exchange in the near future.

The awards’ key objectives are to recognise the contributions of outstanding businesses towards the growth of the country, community and overall economy, and to reward Malaysian companies that have proven their worth, created an impact and made a difference in the lives of the people.