WHAT may merely be history to you and I are real events that unfolded during the life and times of Toh Puan Umasundari Sam-banthan. Now 89, she had a ringside seat at most of the major events around Malaya’s independence, and was even an active participant in many milestone events.

It’s certainly not every day that one gets to talk with someone who was present when Tunku Abdul Rahman made the historic declaration of independence on Aug 31, 1957.

Though that was more than 61 years ago, Uma (as she’s known) still gets emotional thinking about the day when, along with her husband Tun V.T. Sambanthan and thousands of other eager Malayans, she helped usher in the country’s independence from British rule.

“On Merdeka Day, I was nearly 27. We were all gathered and saw the big crowd at Dataran Merdeka, and my first thought was ironic: We cannot go there, it is the Selangor Club, only the orang putih (white people) went there. We were there to see the British flag come down.

“That feeling, I tell you ... you had to have been born and bred during colonial times to understand its impact.

“Then, we were waiting for 12 o’clock. But what happened was, when Tunku came, he was stopped for a few minutes because Umno Youth wanted to give him a title, so that delayed things a bit. Not many people know about it. They think that Merdeka was declared when the British flag went down and it all happened at midnight, but actually it was a short while after,” she tells Sunday Star.

“When God Save The Queen was played for the last time, and the British flag came down, we were so joyful. The youth section of the three parties (Umno, MCA and MIC) were given the honour of collecting the flag. Then they played the new anthem – it was very exhilarating.

“Even now, every time I hear the anthem, I remember what it means to be free of a colonial regime.”

Indeed, emotions ran over on that historic day: “Tears came down and everything ... the reactions were there.

“But being the wife of a Cabinet member, it was a bit scary also. What experience did they have of running a country? In the run-up to Merdeka, there were so many meetings and a lot of planning, there was hardly any time to sleep. Now you have to run the government and serve the people.

“So apart from the momentary exhilaration and joy, there was the long-term responsibility looming. The main thing was, be honest with the people who had elected us.”

She describes the early years after independence and the formation of Malaysia in 1963 as being heady days of inspiration and hard work.

“Actually, the first 10 years were harmony. Tunku recognised the importance of education and a large part of the budget went there. My husband too was devoted to education. We had a young population that needed to gain skills.”

Indeed, a generation keen to move on from World War II and the Communist insurgency threw their weight behind Tunku’s Alliance government. Women in the mix

Uma recalls how Malaysian women were active in nation-building at all levels.

“Umno had Kaum Ibu that was more political, while an NGO called Perkumpulan Perempuan (Women’s Institute) worked for rural women.

“I learned proper Malay (an improvement on colloquial “pasar Malay”) and developed a dialogue with rural women to help estate workers and their families.

“At the grassroots level, I accompanied my husband on his trips to many estates to organise citizenship registration, and would speak to the women to sensitise them about it.”

She also spoke about the importance of education for their children, especially the girls who were sheltered and often not encouraged to study.

“I asked them to bring the girls to KL for courses. I would meet them myself and accommodate them at home, and send them back myself.

“It gave me great joy to see girls being sent for higher education, and to work with these women, developing skills to give them confidence and see them learning to appreciate their own potential.”

Rural women joined programmes to learn English and income-generation and other skills, with a Unesco (United Nations Educational, Scientific and Cultural Organisation) grant channelled through the Rural Development Ministry.

To give these rural women leaders international exposure, Uma would arrange for them to attend conferences abroad. And to make sure there was a woman MP in Parliament, and also to coordinate all the women’s organisations, “we founded the National Council of Women’s Organisations and facilitated Tun Fatimah Hashim to become the first woman MP, and later the first woman minister”.

Uma herself also served as board chairman of the Jalan Ampang Girls Secondary School in Kuala Lumpur, the first government secondary school for girls, and organised the infrastructure for it (playing field, telephone communication, etc).

Uma also played a leading role in the National Land Finance Co-operative Society, which attempted to address problems that arose in the rubber tapping community as it coped with drastic changes and the closing down of many rubber estates.

Reasons to be grateful

Fast-forward 61 years, and Uma has finally witnessed the end of Umno rule.

“The people expressed themselves. I am very happy that a lot of young people voted. It was a healthy, much needed change.

“As an older person who was involved in bringing Merdeka to this country, I shudder to think how history will show this phase of the last government which was overrun by corruption.”

While conceding that a little more than half a year is too short a time to judge a new government, she says, “It is a start”.

“There is the decency to fix mistakes as they go along instead of covering up. I think it is a very good sign.

“Recently there has been criticism of the racial balance of ministers but I believe that choosing the proper person for the job is the best thing. The government should be looking out for Malaysian not sectarian interests.

“I would like to see the development of a two-party system instead of parties carrying on with a racial foundation. And we can only hope that in-fighting within the ruling party can be contained in the light of the bigger picture of running a stable government.”

She wants to remind Malaysians not to give up on the country when the situation seems bleak.

“I think we’re doing well except that in the last 30 years there were mistakes which should not have been made. There are lessons to be learned there, and applied.

“We have reasons to be grateful also. We have not had an armed revolt. Some of the things done for the people have worked. Having lived under colonial rule myself, I think we have learned over the years to be more responsible in doing our part as voters, as citizens.

She still recalls the challenges of those early days.

“The Japanese Occupation was the first time we were exposed to violence. During the British time we were suppressed mentally, thinking that we had to be run by them. At the estates we were sheltered in a way, though the living conditions were bad. There were no facilities.

“Japanese time was the worst, but it was also interesting because it was then that the Indian National Army (INA) began. Many Indians here collected funds to support the INA. And it was the first time that we saw the colonial master defeated. They were defeated very badly.

“So even in the rubber estates there was this feeling that, ‘I also have an identity of my own’. That’s when it started, the notion of self-respect and dignity, thanks to (Indian nationalist) Subash Chandra Bose.”

A native of Muar, Johor, Uma was academically gifted and obtained a degree in Chemistry from Madras University in India, and even did three years of postgraduate studies – a rarity for a young Malayan woman in the 1950s.

“My parents treated both boys and girls in the family the same. They wanted us to study and they did not discriminate. After the Occupation, our group was the one that missed the Fifth Form.

“During the Occupation there was nothing to do. We learnt Japanese, of course. My mother encouraged me to read, and we read a lot of English at home. I did not have subjects to learn, so I just kept reading anything available in English. So that helped me to excel in my exams later.”

However, even armed with such qualifications, she found it difficult to get work.

“I went to look for a job as a teacher, and this British woman, Mrs Milne, refused to let me in or even to meet me at her gate. My Indian degree was not respected. During colonial times they did your thinking for you.”

While happy with the continuing evolution of the role of Malaysian women in society she still feels that there are inequalities that need to be addressed.

“There are a lot of areas where we need to upgrade women still. One startling instance is the Indira Gandhi case. The Federal Court has found for her but she still hasn’t been reconciled with the child that was taken away from her as a baby. (Indira fought the unilateral conversion of her three children to Islam by her estranged husband, who took her youngest child away.)

“These are shortfalls that need to be addressed, and women’s organisations still have a role. Though, on the other hand, these should not be tagged only as ‘women’s issues’. They are fundamental.”

Uma herself remains fully engaged in the developments of the nation and has no intention of slowing down if she can help it. Some recent issues like the dispute over the Icerd (International Convention on the Elimination of All Forms of Racial Discrimination) ratification and the fracas over the Seafield temple have alarmed her.

“I was very disappointed when I saw that. We have groups like Perkasa, we don’t need them. I think they give a very bad image of a particular race that is not true. Unfortunately, extremists in our society are getting a lot of publicity and fuelling the fire.

“We have the oldest prime minister in the world and he has tremendous experience and a very beautiful quality of facing what went wrong in his time and that, before he leaves, he must correct it.

“Our people must be ready to fight negativity to keep the country great.”

On how she spends her time now, she says, “I read and write”.

“There was a time when I used to sew and all that but now not so much. I love music. I used to play an instrument and sing. My dad used to have records with music in all languages as did my husband later. I also indulge my soft spot for Korean serials!” 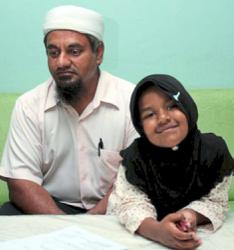