Flashback: New King to take oath of office on Jan 31

Royal residence: The exterior of Istana Negara in Kuala Lumpur, where the next Yang di-Pertuan Agong will reside after being sworn in. — Bernama

PETALING JAYA: The next Yang di-Pertuan Agong will take his oath of office on Jan 31, which will enable him to carry out his duties, according to the Keeper of the Rul­ers’ Seal.

Tan Sri Syed Danial Syed Ahmad said after taking the oath, the 16th Yang di-Pertuan Agong could begin his responsibilities as the King.

“These are referred to as the special meetings of the Conference of Rulers. This is to differentiate from the routine meetings scheduled thrice annually,’’ he said yesterday.

Syed Danial said the event on Jan 24 would be a restricted meeting involving the substantive hereditary Rulers of the nine states and the Keeper of the Rulers’ Seal, who is the person appointed as secretary by the Conference of Rulers pursuant to Schedule V of Article 38 of the Federal Constitution.

“The latter meeting (on Jan 31) is a special meeting of the Conference involving all the members, meaning the Rulers and Yang di-Pertua Negeri (or their nominated representatives) in the presence of the Chief Justice (or the next most senior judge).

“The oaths to be taken by the Yang di-Pertuan Agong and his deputy must be witnessed by two Rul­ers selected by the Conference of Rulers,” said Syed Danial.

He said the new Yang di-Pertuan Agong will then sign a proclamation of having taken office from that date.

“That proclamation will be read out by the Prime Minister. For that special meeting (of taking the oath of office), guests will be invited to witness the august and important occasion.

“They will include the official advisers to the Rulers such as all the Mentris Besar and Chief Ministers, Cabinet Ministers and other VIPs,” he added.

Dr Mohammad Shamsuddin, an expert on Malay customs from Uni­versiti Kebangsaan Malaysia, said the newly sworn-in King will then decide when he wants to hold his ceremonial installation.

“He will be advised by the Con­ference of Rulers on a proper date to hold the ceremony.

“Usually, it is within a year of the swearing-in. However, the King can immediately assume all his duties right after taking the oath of office, even though he has yet to be installed as the King ceremonially.

“While the taking of oath of office is done among the Conference of Rulers themselves, the installation ceremony is largely a public affair, to announce to the public and the world that the country has installed a new King,” said Mohammad. 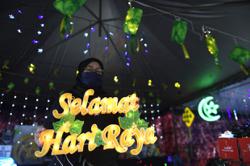