Old building: One of the dilapidated houses along Coolie Line (Strawberry Valley).

GEORGE TOWN: The controversial decision to build two new hotels on Penang Hill will go ahead despite strong protest from pro-green groups.

He said there also would not be a mega project comprising a casino, spa, golf course or five-star hotels as proposed back in the late 80s.

“This proposal involved the refurbishment of Convalescent Bungalow and the redevelopment of the 13 dilapidated buildings that used to be workers’ quarters along the Coolie Line (Strawberry Valley) at the hilltop.

“The two hotels won’t be built from scratch. Neither will it be based on the 1989 proposal where there will be hotels, spa, golf course and a casino built on a slope,” he said.

Chief Minister Chow Kon Yeow was earlier quoted as saying that two new hotels, including one with 200 rooms, would be coming up on Penang Hill.

His announcement did not go down well with several non-governmental organisations, which urged the state government to cancel the plans as the hill was a precious part of Penang’s heritage and should not be sacrificed for the sake of narrow commercial interests.

Both the Consumers Association of Penang and Sahabat Alam Malaysia also claimed that the hill was landslide-prone.

“PHC would initiate a Request For Proposals (RFP) for the developments of Convalescent Bungalow and Coolie Line in the next few months,” he said, adding that both projects were still in preliminary planning stage. 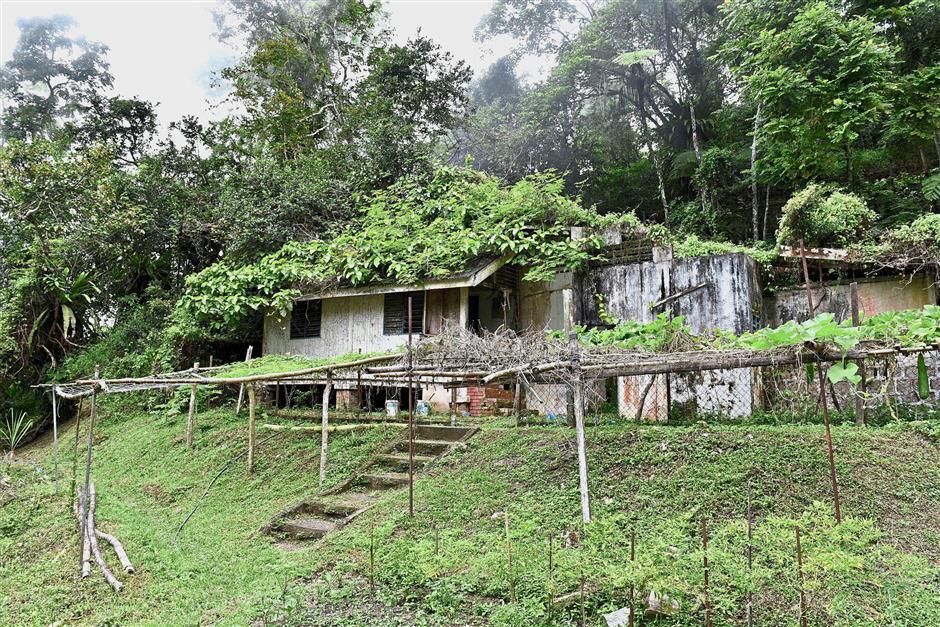 Future redevelopment: Cheok showing the Coolie Line site at the hilltop where plans are afoot to turn the 1.6ha site into a hotel.

Cheok said interested parties are welcome to submit their proposal to PHC when the RFP process begins.

He clarified that the proposal to build a 200-room hotel near the Convalescent Bungalow was a previous concept proposal that would be reviewed when the project is ready to kick off.

“The actual design will then be provided by the participants through the RFP process.

“Rest assured, there won’t be cutting of forests as the developments will take place on existing footprint.

“Let’s not get excited as it won’t be a mega development, but rather small-to-medium-sized boutique hotels,” he said.

Built in 1803, Convalescent Bungalow is one of the oldest bungalows on Penang Hill. It once served as a convalescence home to British officials during the colonial era.

Currently, the transfer of management of Convalescent Bungalow from Chief Minister Incorporated (CMI) to PHC is still ongoing.

On Coolie Line, Cheok said: “We would like to stress that the redevelopment of Coolie Line will be on existing footprint of the quarters and buildings, with no development on the slopes.”

Cheok said both projects would follow the SAP and local plan strictly as they must blend well with the environment.

“The concept and philosophy of design must be compatible with the history and cultural heritage of Penang Hill.

“We can’t block the view, and the height of the buildings will be controlled as well.

“We will pick a partner who will take good care of the place, passionate about eco-tourism as the design must blend well with nature.

“In the SAP, there is talk about heritage value, and we want the results to reflect the natural and heritage value of Penang Hill.

“There will not be high-rise buildings, and the heritage view will be preserved. Any construction will not get too close to the railway,” he said.

Cheok also said they have been receiving close to two million people who are using the railway and jeep tracks to the hilltop yearly.

“Over the years, PHC received numerous requests from both local and foreign visitors for accommodation on Penang Hill.

“In response to this, the state government directed the PHC to look into refurbishing and repurposing some of the old government assets on Penang Hill for productive use.

“We want to provide more choices of accommodation for visitors and additional tourism attraction on Penang Hill.

“Many of them intended to stay for a night or two to relax, explore and enjoy the beauty of nature on the hill.

“Currently, there is only one hotel here with 12 rooms and most of the bungalows here are privately owned,” he said.

On whether they would be able to cope with an expected huge influx of visitors once the hotels are ready, Cheok said the Coolie Line used to be homes to families of workers on the hill before it became unoccupied.

“The place used to house quarters of Tenaga Nasional Bhd, Public Works Department and Keretapi Bukit Bendera. There used to be a community here,” he added.

On whether there will be a third access for Penang Hill besides the railway and jeep track, Cheok said PHC did not have any plan for a third option for now.

Many voice against development on hillslopes