PETALING JAYA: Fugitive businessman Low Taek Jho, better known as Jho Low, has not given up his quest seeking immunity from the government.

According to Council of Eminent Persons (CEP) chairman Tun Daim Zainuddin, Low tried to reach out to him only last week.

“He did not call me but he called an officer of mine last week,” Daim told Astro Awani in an interview excerpt from a special programme titled "Perspective Tun Daim" on Wednesday (Oct 31).

Daim said Low made many requests, including wanting to meet him and Prime Minister Tun Dr Mahathir Mohamad.

“He has money, he can do anything, change his face or whatever, I don’t know,” Daim was quoted as saying.

“He kept quiet. I said you cannot deliver, so why should I talk to you?” he said.

Low is wanted for his role in the multibillion-dollar scandal at state fund 1Malaysia Development Berhad (1MDB). 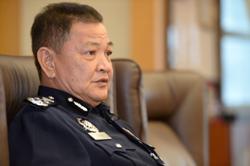