Elections (Bersih) with the Islamic State (IS) militant group.

He found that Jamal's statements were defamatory and he failed to prove the facts of his comments.

Maria, who was Bersih 2.0 chairman at the time, had sued Jamal for allegedly linking the Coalition for Clean and Fair Elections with the Islamic State (IS) militant group.

In her lawsuit, Maria claimed that Jamal had, on Sept 28, 2016, falsely uttered slanderous words against Bersih during a press conference on the Putra World Trade Centre grounds.

She also claimed that on Oct 4, 2016 Jamal had uttered similar slanderous words against Bersih during a media conference at the Bukit Aman police headquarters compound.

She said the media and news portals later published the statements in print and online.

In the statement of claim filed on Oct 7, 2016, Maria said she had been brought to public scandal and had her reputation and good name tarnished.

She had sought general and aggravated damages, as well as an injunction to stop Jamal from uttering or publishing similar words, be it verbally, in print, or online. 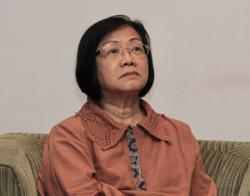