Rebel without a pause

LOVE him or hate him, it’s hard to ignore Hishamuddin Rais. After a life of exile and detention, street politics and independent movies, mainstream columns and conspiracy theories, he has not been tamed. Despite being part of the Parti Keadilan Rakyat and Pakatan Harapan war room during the elections, he is not the sort to stick loyally to a single narrative. His main purpose now, he tells Sunday Star in his trademark colourful language, is not about Tun Dr Mahathir Mohamad or Datuk Seri Anwar Ibrahim, but defending the gains of the May 9 election victory. To that end, his commitment is to the reform agenda and the truth.

“I don’t know who started this ‘100 days’ nonsense but the reform agenda will take more time than that, and more than the five months we have had now since May 9. Reforms will have to undergo a certain process: discussions with stakeholders, evaluation and then go to parliament... So, it will take time. I am really pleased with what has happened now.”

Politics makes for strange bedfellows and it’s a peculiar sight to see Hisham in the same camp as Mahathir, who was Prime Minister when he was arrested under the Internal Security Act (ISA) in 2001 and Education Minister in 1974 when he fled the country during a crackdown on student activism.

“I come from the left-wing tradition, and this coalition government is a broad united front. We have seen this with Mao Zedong and Chiang Kai Shek and Stalin and Churchill, and they were all together against a common enemy. We also had one common aim, which was to overthrow Najib and Umno and to set up a new government. I share this ideal and Mahathir Mohamad shares this ideal so that is the meeting point. Yes, Mahathir put me in jail, yes Mahathir introduced the UUCA (the Universities and University Colleges Act), Mahathir also arrested me under ISA twice but that doesn’t really matter,” says Hisham, still full of fire at 67.

“This is the bigger picture for the nation, I do not carry personal grudges or vengeance. As long as the agenda of reform is the agenda of a new government set up by Mahathir, then I’m with him.”

How long should the reform agenda take? 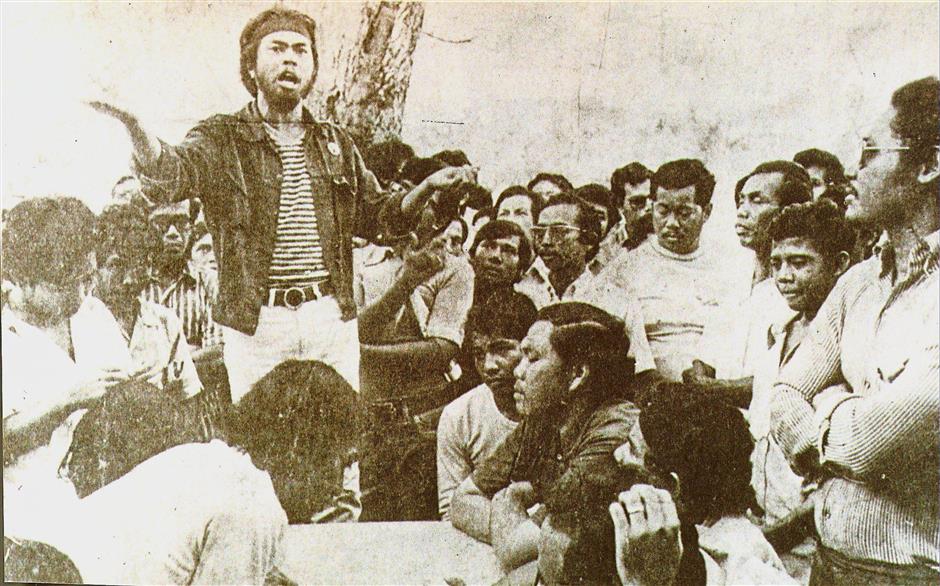 Ever the rabble-rouser: Hishamuddin has been going to the streets to fight for social justice and other causes since his student days.

“The Umno government was there 60 donkey years. In the reform agenda, we need structural changes and certain institutional reforms – and this will take time. Abolishing GST can be done quickly. The other day, with the Anti-Fake News Act, we saw how it went through the Pakatan-controlled Dewan Rakyat but was rejected by the Barisan-controlled Dewan Negara, so this takes time. This is a democratic process, and we must also consult the stakeholders, we cannot simply bulldoze it through. There are over 30 million stakeholders in this country you know.”

Hisham can’t resist being cheeky when asked about the Sedition Act 1948.

“It was (introduced) during colonial times and I tell you the queen was still a virgin when she introduced that Act,” he quips. (Strictly speaking, it was introduced during the time of Queen Elizabeth’s father George VI.)

“They are re-evaluating it, they will do it and all those who have been charged now have had their charges suspended. With the exception of me because I was charged and fined RM6,000 before the new government took over. Recently Kadir Jasin was called again under the Sedition Act but then Suhakam made a statement. It was a brilliant statement. This is the new government, nothing cannot be discussed in the new government now. Nothing. Nothing is so holy that we cannot discuss. We can discuss LGBT, the royal family, corruption.”

How certain is he that the new government will maintain that spirit and guarantee freedom of assembly, freedom of information and press freedom?

“My friend, we are in the honeymoon period here. If you have a girlfriend, everyone is having a jolly good time. But I am worried because for me, the most important agenda now is how to protect our May 9 victory. Democratic struggle: Hishamuddin with PKR vice-president Tian Chua, out on bail after they were charged for participating in unlawful assemblies.

“The agenda today is not about the PD by-election or Anwar Ibrahim becoming prime minister. That is not important. What is important is how to protect the gain, this is more important,” he stresses.

This is the first time he has been interviewed by The Star newspaper, he points out. (Editor’s note: Err, we have actually interviewed Hishamuddin a few times before this.)

“I think the PSM missed one important thing. As I have told Dr Jeyakumar after he was voted out, Dr Jeyakumar had used the PKR flag (in the 2008 and 2013 elections). In the last one he decided otherwise and he lost. He thinks it was about socialism. But no, it wasn’t. It was the move of people in support of Anwar Ibrahim, in support of Mahathir and the hatred towards Barisan Nasional and Umno. So, the analysis was wrong. If Dr Jeyakumar had used the PKR logo again, he would have won easily,” he laments. “I was just thinking he is probably one of the best potential ministers around. He is very articulate, very well educated, with an honest background, but he missed the chance.”

It is unrealistic to expect every reform to happen immediately, says Hisham, but he would like to make an unusual proposal about education. He calls for the UUCA to be abolished within six months and a progressive university to be set up.

“Dr Maszlee please listen to this, set it up like University Malaya with the atmosphere of the sixties. Let them have a student union, let them organise themselves, let them collect fees, let them have their newspaper. We try one university first. It can be done.”

Aside from his political rabble-rousing, Hishamuddin Rais is also known for his artistic leanings and has even dabbled in movie-making with Dari Jemapoh ke Manchestee in 1998.

“My film was so popular that the government forced it to be taken out from the cinema,” he jokes. New wave: Hishamuddin’s debut feature film ‘Dari Jemapoh ke Machestee’ was a hit when it was finally released in Malaysia in 2001.

On a serious note, he adds, “Now my battle is over, the government is sacked, we are supposed to have more freedom. So, let’s see what happens. We need enlightenment in cinemas, classroom, lectures, all these things. If this thing (change of government and new reform agenda) is being done, that means the nation, rakyat, of all races already know their rights. For 60 years they were put under the thumb. Now for the first time, they dare to come up.

“We need to open up. Newspapers should open up. The media must play a role.”

Does he feel a kinship with other political activists like Fahmi Reza or cartoonist Zunar?

“I share their humour but we do not come together because I still do not like to be in a group or a union. I do not like to read the minutes of the last meeting and the organisational structures.”

Once self-defined as a non-governmental individual, Hishamuddin Rais is hoping to get his autobiography done soon.

“My brother, I created this term NGI (non-governmental individual) because when I was under detention in the ISA and the special branch interrogated me, they demanded to know who I worked for. I still have no political party, no group, no NGO, I am not even working for anybody. I am still an NGI. In fact I should have trademarked the term. It’s gone global!”

He adds, “My future plans are very simple. I am writing. My number one responsibility is to speak the truth, my number two responsibility is to work on my autobiography. Slowly, slowly, one page every day and hopefully, very soon, the first volume will come out. The first book will come out but it depends, you know. If suddenly there is turbulence again in the political scenario of Malaysia, I will be called to the street again and my autobiography will have to be put aside.

“The nation is of importance. You know, when I am dead and buried, then you can define me. I tell people, that I am not the original rebel, but I am a rebel without a pause.”