The senior public officer was arrested when she was called to the Malaysian Anti-Corruption Commis­sion (MACC) headquarters late yesterday evening.

Highly-placed sources in MACC believe the former senior civil servant can help shed some light as to how her officers from the research division of the Prime Minister’s Department had got their hands on the cash, said to be around US$400,000 (RM1.6mil).

Sources said the money was believed to be part of the funds received by the division from the previous administration.

“After Barisan Nasional lost, they were tasked with transferring the money to a location. In the process, they ‘took’ part of the stash,” a source told The Star.

Hasanah is expected to be remanded today at the Putrajaya magistrate’s court.

“Yes, we are detaining her for questioning,” he said when contacted but refused to comment further. 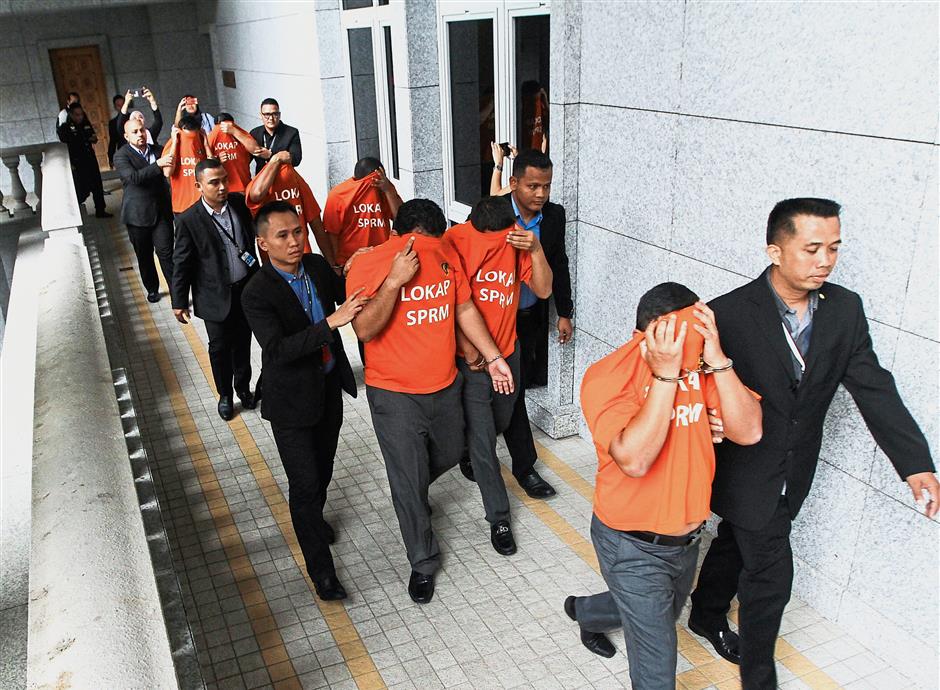 Taken away: MACC officers escorting the seven PMD officers at the magistrate’s court in Putrajaya.

Earlier yesterday, seven civil servants from the research division, including a high-ranking officer, were remanded in investigations into the alleged misappropriation of GE14 funds.

One of them holds the post of deputy director-general while the other six are officers of Grades between 44 and 48.

The senior officer was arrested when he came to the MACC headquarters on Monday to have his statement recorded at 10pm while the rest was picked up from the office.

They were taken to court for remand application where Magistrate Shah Wira Abdul Halim granted prosecutors five days till Sept 1.

Earlier this month, 17 security personnel were remanded for allegedly taking cash amounting to RM3.5mil from the Prime Minister’s Office. They are said to have taken the money when they learnt that Barisan Nasional was losing the general election.