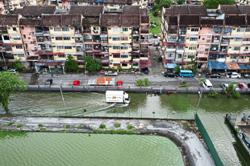 SHAH ALAM: Two workers have died and 18 others were hurt after they were believed to have inhaled ammonia gas which leaked at a ice factory in Section 36 here Monday.

Section 15 Shah Alam Fire and Rescue station chief, Deputy Superintendent Azmel Kamarudin, said the two fatalities in the incident which occurred at 5.12am were believed to be Indian nationals and their bodies had been sent to Tengku Ampuan Rahimah Hospital (HTAR) in Klang.

However, their identities had yet to be ascertained, he added.

“The two workers who died were believed to have inhaled the ammonia gas which leaked from a tank that was stored, while doing routine work.

“Those injured had breathing difficulties, vomiting and eye irritation due to the high ammonia content which was of 500 ppm (parts per million) compared with the normal reading of 50 ppm and below,” he told Bernama.

Azmel said that on arriving at the scene, the fire and rescue team, comprising seven officers and 10 members including some from the Hazardous Materials Management Team (Hazmat), also ordered residents within a 3km radius of the ice factory to vacate their houses and buildings.

A Chinese school located in front of the factory was also advised to close today for safety reasons, he said, adding that the ammonia gas leak was the second incident reported at the factory.

Meanwhile, Selangor Mentri Besar Amirudin Shari, in a statement, said the state government viewed the incident seriously and had instructed the Shah Alam City Council and the relevant quarters to take necessary action to ensure the safety of residents in the surrounding areas.

He also thanked the fire and rescue team for its rescue operations at the ice factory concerned. –Bernama