Rabies immune belt to be discussed with Sarawak

PETALING JAYA: The plan to creat­e a rabies immune belt along the Sarawak-Indonesia border is ready and will be discussed next week.

The “immune belt”, mooted last year, will ensure better control of the disease, whereby dogs in the area must be vaccinated and autho­rities are on constant alert for cases.

“We will be meeting the Sarawak DVS director next week on the matter,” he said.

In February, it was reported that the DVS will finalise the structure of the rabies immune belt, including its size, and identify the resources needed to set it up.

The proposed immune belt along the Sarawak-Kalimantan border will be the second of its kind in Malaysia after the current area in the northern peninsula that was set up in 1955 along the Thai border.

Rabies in Malaysia claimed its latest victim on Thursday when a 21-year-old woman from Serian, Sarawak, died from the disease.

On the latest death, Dr Quaza Nizamuddin said control measures to curb rabies are still in place and will be continued.

“Dog owners in Sarawak must ensure their pets are vaccinated against rabies.

“They should also prevent their dogs from roaming around freely to avoid being infected by strays,” he said. 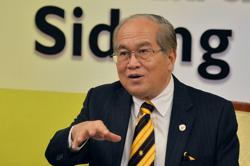