KUALA LUMPUR: Retired civil servant Nurul Aini Sidek is not only looking forward to the increased 1Malaysia People’s Aid (BR1M) payouts for folk like him but is grateful for the benefits that members of his family stand to get too as pledged by the Barisan Nasional.

The coalition has promised to up BR1M this year from RM1,200 to RM2,000 for recipients with household incomes of RM3,000 and below.

The 67-year-old said the extra money will come in handy in meeting the needs of his household.

“We’ll use it for groceries, and save the rest.

“The cost of living has gone up, so alhamdulillah, the BR1M can help to offset household costs and daily spending,” said Nurul Aini at his Batu Muda Public Housing Project (PPR) flat here yesterday.

The grandfather-of-eight was pleased with the increased aid that will directly benefit him as announced by Barisan chairman Datuk Seri Najib Tun Razak under the coalition’s election manifesto on Saturday.

He also commended the Prime Minister for looking after the welfare of civil servants, which he observed during his time at Cuepacs (Congress of Unions of Employees in the Public and Civil Services). 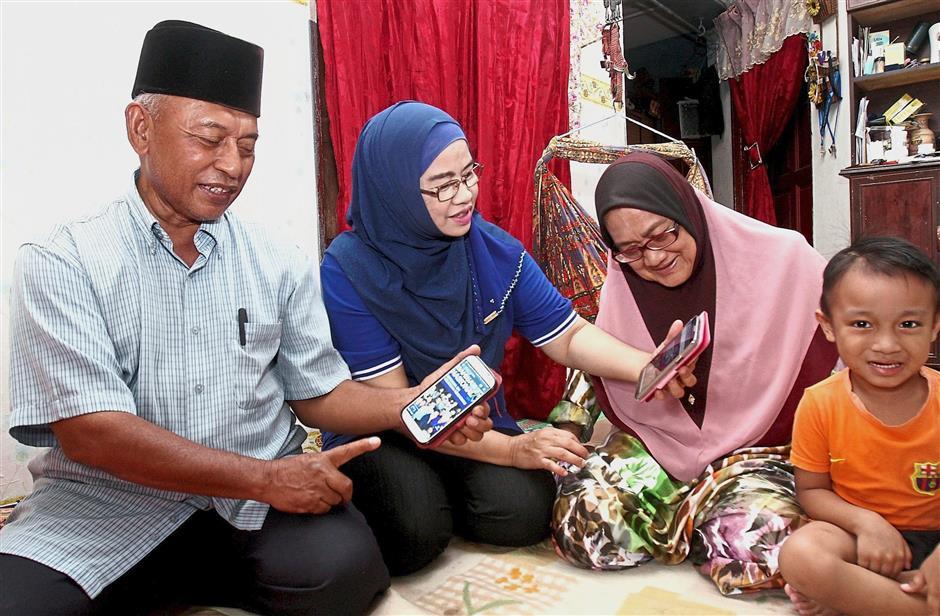 His wife, homemaker Norishah Mohd Said, was busy minding her grandchildren aged two and five, on behalf of her daughter-in-law, a private-sector employee, during the interview.

Working women with young child­ren will benefit from Barisan’s pledge to encourage the private sector to adapt the flexible work-hour scheme for mothers with children aged two and below.

Under the promises outlined by Barisan for GE14, the 60-year-old could also enjoy an open membership to special clubs and selected community programmes for retirees and senior citizens.

Meanwhile, the widow of Nurul Aini’s cousin, Halimatun Saadiah, a kindergarten teacher, was heartened by Barisan’s pledge to boost the income of B40 single mothers through training provided under the Permata Child Care Course.

Apart from that, the 56-year-old mother-of-four could also be a beneficiary of Barisan’s aim to tap the potential of single mothers through upskilling programmes, retraining schemes and special work opportunities.

She gave the thumbs up to Barisan’s plan to allocate seven days of special leave per year for women who are caregivers to their children or immediate relatives who are ill.

“As a single mother, I know how tough it is to take care of children and the elderly. We have to handle everything. It’s just us,” she added.

Halimatun, whose children are aged between 23 and 34, was delighted to hear that one-off RM1,500 handouts will be given to the children of BR1M recipients who enrol in institutions of higher education.

Two of her children are still furthering their studies.

“Aid like this eases the family’s burden. We can use it for their books and educational needs,” she added.