GEORGE TOWN: The corruption trial involving Penang Chief Minister Lim Guan Eng and businesswoman Phang Li Koon began in the High Court here on Monday (March 26).
The trial, in connection with the conversion of land from agriculture to residential and the purchase of a plot of land and bungalow at below market value began with the prosecution submitting amended charges to both the accused.
However, Lim and Phang pleaded not guilty to the amended charges, read out before judge Datuk Hadhariah Syed Ismail.
For the first amended charge, Lim was charged with using his position as a public officer, namely, Chief Minister of Penang, to gain gratification for himself and his wife,
Betty Chew Gek Cheng, by approving the application for conversion of agriculture land to a public housing zone in southwest Penang to a company, Magnificient Emblem Sdn Bhd.
Lim, 58, was charged with committing the offence while chairing the Penang State Planning Committee meeting at the operations room, Level 28, Komtar building here, on July 18, 2014.
The amended charge involve the change of “civil servant” to public officer”.
The charge under Section 23 of the Malaysian Anti-Corruption Commission (MACC) Act 2009 provides an imprisonment for up to 20 years and a fine of up to five times the sum or value of the bribe, or RM10,000, whichever is higher, upon conviction.
For the second amended charge, Lim was charged with using his position to obtain for himself a plot of land and a bungalow, located at No 25, Jalan Pinhorn, George Town, from Phang for RM2.8 million, a price which he allegedly knew did not commensurate with the property's then market value of RM4.27 million.
The offence was allegedly committed at No 25 Jalan Pinhorn, George Town here on Oct 21, 2015 (instead of July 28, 2015 as stated in the original charge).
The charge was framed under Section 165 of the Penal Code, which provides an imprisonment for up to two years, or a fine, or both, upon conviction.
Phang also  pleaded not guilty to an amended charge with abetting Lim in obtaining the bungalow at an undervalued cost at the same place and date.
She was charged under Section 109 of the Penal Code, read together with Section 165 of the same law, which provides an imprisonment for up to two years, or a fine, or both, upon conviction.
Lim and Phang arrived at the court room at 8.50 am, with the public gallery filled up by their family members and supporters.
Twenty media practitioners were allowed into the court room to cover the hearing.
The public, including members of the media were at the court compound since 7.30 am and were only allowed into the court room at 8 am after passing through a metal detector.
The prosecution team is led by deputy public prosecutor Datuk Masri Mohd Daud, while Lim is represented by a panel of lawyers, including Gobind Singh Deo, Ramkarpal Singh and RSN Rayer.
Lawyers Datuk V.Sithambaram and Hisyam Teh Poh Teik acted for Phang.
Masri informed the court that the prosecution would be calling at least seven witnesses today.
The court allowed the prosecution' s request for the cases involving Lim and Phang to be heard jointly. - Bernama
Article type: metered
User Type: anonymous web
User Status:
Campaign ID: 18
Cxense type: free
User access status: 3 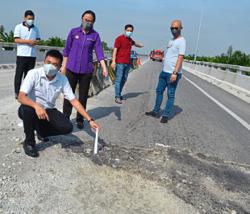 A bridge not too far

Six sentenced to death for murder of Kevin Morais (updated)