The former Agriculture Minister and Kedah Mentri Besar passed away on Friday morning at his house in Pantai Dalam.

His daughter, Amanda Ruhul Hamidah, 40, stated that her father's health was in excellent condition despite having a history of heart disease.

"His passing was unexpected to us all as he had just performed a medical check-up on Thursday.

"The results showed that there was nothing wrong with his health," she told reporters at Masjid Umar al-Khattab, Bukit Damansara. 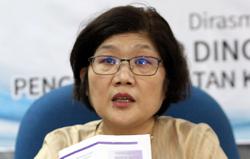