How dangerous is pneumonia?

PETALING JAYA: When people think of pneumonia, they tend to equate it with the elderly and those with weaker immune systems.

But can pneumonia equally affect the young and relatively healthy?

Sungai Buloh Hospital Infectious Disease head Datuk Dr Christopher Lee said that the organisms that cause pneumonia can be transmitted from person to person.

“The bugs that cause infection can spread. They are, in general, contagious, but some types are more contagious than others,” he said.

RSV causes the same symptoms as a cold. It is common, contagious and most children would have had it by age two.

Although RSV infection is usually not a matter for serious concern, it can lead to pneumonia.

Meanwhile, SARS is a serious form of pneumonia.

Identified in 2003, the epidemic was believed to have started when the virus spread from small mammals to humans in China.

SARS is caused by a member of the coronavirus family of viruses – the same family that causes the common cold. 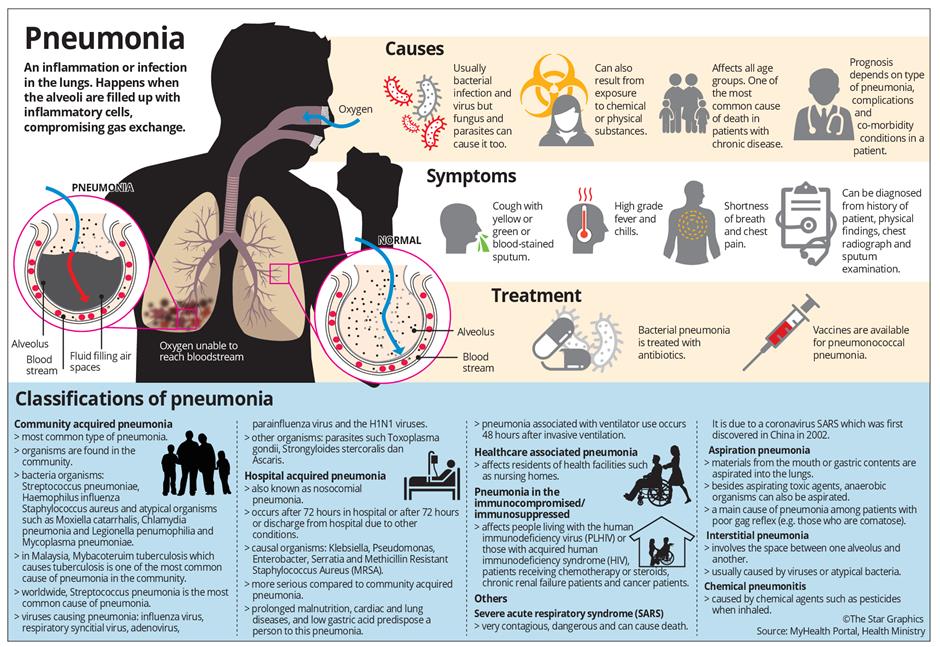 It can spread through coughs, sneezes and infected surfaces.

MERS, a viral respiratory illness, was first reported in Saudi Arabia in 2012 and has since spread to several other countries.

Most people infected with MERS-CoV develop severe acute respiratory illness, including fever, cough and shortness of breath, and many have died from the infection.

He said that pneumonia is the most frequent infection requiring hospitalisation in most developed and developing countries.

“There’s also significant mortality and morbidity, as well as increase in use of healthcare services,” he said.

According to Dr Lee, the presence of other medical conditions, such as HIV infection, diabetes, the long-term use of steroids and chronic lung diseases like asthma, chronic obstructive pulmonary disease and lung fibrosis, will also determine how easily a person can catch pneumonia, as well as how severe the pneumonia will be.

Pneumonia is also more common among those above age 65, especially if they already have significant co-morbid conditions such as heart disease, chronic lung illnesses, diabetes, renal failure or HIV, he added.

That is why it is important for those in the risk group, as well as everyone else, to adopt preventive measures against bacteria and viruses, Dr Lee said.

These measures include getting the appropriate vaccinations for infections caused by influenza and pneumococcus, adopting good personal hygiene and practising social distancing from those with respiratory infections.

If that is not possible, people should use the appropriate personal protective equipment and practise good hand hygiene, he said.

On whether there is any particular type of pneumonia linked to floods, Dr Lee said “not directly”.

“Flood-related infections tend to be food and water-borne infections, as well as those linked to rodents,” he said.

A milder form of pneumonia