By WONG CHUN WAI and

SHAH ALAM: The deliberate use of sensitive issues to fish for votes in the general election will destroy the country, warns Selangor Ruler Sultan Sharafuddin Idris Shah.

The Sultan said he did not wish to see politicians playing with matters of race, religion and other sensitive issues for political gain.

“This is the concern of all the Malay Rulers, all nine of us. We have often discussed this during the pre-council meetings that we hold before the Conference of Rulers.

“The Rulers are very worried. Too many sensitive issues have been exploited for personal gain. Issues like these spread very fast on social media and it can divide our rakyat,” said Tuanku Selangor in an exclusive interview with The Star ahead of his 72nd birthday on Dec 11.

He said this was why the Malay Rulers issued a strongly worded statement on Oct 10 in connection with the uproar over the Muslim-only launderette in Johor.

In the statement, the Rulers made a united stand that such an action was detrimental to the multicultural make-up of the country.

The Rulers stressed that in any religion, the followers must be respectful, moderate and inclusive.

Sultan Sharafuddin said yesterday he was disappointed that the Oct 10 statement seemed to have gone unheeded because another racial controversy arose just a few days after that.

The Tuanku was referring to a remark made by former premier Tun Dr Mahathir Mohamad at the “Love Malaysia, Anti Kleptocracy” rally on Oct 14, where it was alleged that the Pakatan Harapan chairman had compared the Bugis community to pirates.

Various police reports have been lodged against Dr Mahathir, calling for action to be taken against him under the Sedition Act.

In a short clip of Dr Mahathir giving a speech at an Oct 18 event in Kemaman, Terengganu, he was recorded saying: “Not all Bugis are pirates. Our King also has Bugis ancestry. I didn’t say our King is a pirate. What I’m saying is Najib is a pirate.”

“He is an angry man and will burn the whole country with his anger,” said Tuanku.

Asked about his views on the coming general election, the Sultan said he had met and spoken with many of his rakyat.

“The people in Selangor want a corruption-free government. They want their needs to be looked into, things that are important to them such as affordable housing and education, access to quality healthcare at affordable rates.

“As for me, I want my rakyat to be able to live in peace and harmony, without quarrelling over sensitive issues. Respect each other,” he said.

As the Royal House of Selangor is above politics, Sultan Sharafuddin said he does not vote, and neither will his wife or his children.

“My grandfather and my father practised this. And so do I and my sons,” he said.

Sultan Sharafuddin added that he will continue to carry out his duties as the leader for all races in Selangor.

“It is a balancing act. But it is a good learning ground and I enjoy the challenge of solving problems. One needs to be cool-headed and rely on a lot of different teams to get feedback from the ground before making any decisions.

“For me, I get my information from different groups and these people don’t know each other.

“It is wrong to think that I am influenced by one party or the other in my decision-making. My only concern is the well-being of my rakyat and that is the main influence over me,” said the Sultan.

In Sunday Star: Tuanku’s dream for Selangoreans, his marriage, and his penchant for cold showers.

Sultan only rebuked Dr M after getting all the facts 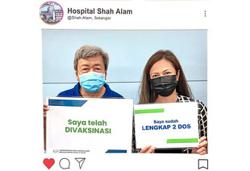