The 63-year-old actor, known mostly for hosting Malaysia’s version of Who Wants to be a Millionaire?, married Rapidah Abd Ghani, 44, in a ceremony attended by some 100 guests, including other artistes and friends.

The actor was married to Datin Hashimah Mad Ehsan for 40 years before she passed away on Nov 5 last year due to complications from diabetes and lung illness.

On Oct 9, it was reported that Jalaluddin got to know Rapidah via Facebook.

Most aware of risks but still text and drive

PUTRAJAYA: A study carried out by the Malaysian Institute of Road Safety Research (Miros) found that the majority of Malaysian drivers acknowledged that the use of mobile phones while driving was a contributing factor to road accidents.

Miros chairman Tan Sri Lee Lam Thye said they also agreed that the use of mobile phones while driving could influence driving behaviour and posed danger to themselves and other road users, but they were still doing it.

In last year’s study carried out on 300 random responders in the Klang Valley, Miros found that 43.4% of road users used mobile phones while driving cars and riding motorcycles, while 61.7% of drivers had received or made phone calls while driving at least one to three times a week.

Committee on empowering use of Malay to be set up

Education Minister Datuk Seri Mahdzir Khalid said the ministry would act as the secretariat for the committee which, among others, would discuss the use of the language in the service and delivery system of all ministries and government departments.

“This is to enable the use of the Malay language in all matters. We will bring it to the Cabinet for approval,” he told reporters after launching the Intellectual Discourse Programme with lecturers of the Darulaman and Sultan Abdul Halim campuses of the Institute of Teacher Education, here, yesterday.

Mahdzir said the Cabinet committee would also discuss the existing law regarding Bahasa Melayu and on giving power to Dewan Bahasa dan Pustaka (DBP) to monitor the use of Malay language in writings. – Bernama

TELUK INTAN: The Agriculture and Agro-based Industry Ministry will provide RM14.5mil to aid 5,547 padi farmers who suffered losses from the Penang floods.

Deputy Minister Datuk Seri Tajuddin Abdul Rahman said fertiliser, pesticides and padi seeds would be channelled to them after a thorough survey by the ministry.

“It is estimated that over 12,000ha of padi land were affected and this would require RM1,500 in aid per hectare for re-ploughing and replanting of seedlings, besides fertiliser,” he said at the opening of Kospen Square in Kampung Kunci Air 4, Sungai Manik, here, yesterday.

Tajuddin, who is also Pasir Salak MP, said the ministry had also channelled other forms of aid to Penang residents affected by the floods. – Bernama

Over 50 people nabbed in raid on outlet

SERDANG: More than 50 people were detained after police raided an entertainment joint in Bandar Puchong which was open beyond its normal operating hours.

Among those held in the 4am raid on Sunday were the manager and captain of the outlet and 18 other workers.

Police also nabbed 31 foreign women who were employed as guest relations officers at the outlet.

BUTTERWORTH: A 36-year-old driving instructor died when he lost control of his car, which hit a road divider at Jalan Pokok Machang near the Malakoff Estate here.

The man was pinned inside his car and Fire and Rescue personnel had to be called to retrieve him, in the midnight incident yesterday.

North Seberang Prai district police chief Asst Comm Noorzainy Mohd Noor said the man was taken to the Seberang Jaya Hospital but died around 4.30am from head and chest injuries. Govt may set up more clinics at malls and shoplots

KUALA LUMPUR: The Government has not ruled out the possibility of building more health clinics at commercial premises like shoplots or shopping malls to provide convenient health care services to the people.

“The Government will make a decision based on the current need, cost factor and convenience. Not all health clinics will be set up at commercial centres but a study will be conducted before making a decision,” he said after opening the Kem Nak Sihat ‘Bersama Komuniti Kekal Sihat’ programme at the Kota Damansara Health Clinic yesterday.

The clinic that started operations in a five-storey shoplot in Kota Damansara was set up at a cost of RM11.7mil and provides outpatient treatment, dental services, X-ray and emergency treatment.

Dr Subramaniam said the Kem Nak Sihat programme was to promote a healthy lifestyle among the people. – Bernama

KOTA KINABALU: Police have arrested three men who brazenly carted away a safe after breaking into a department store in Tawau.

The arrests of the three men, aged between 20 and 28, came on Saturday, a few days after they broke into the department store at Taman Sawit, Balung.

Tawau police chief Asst Comm Fadil Marsus said the burglary was discovered by a store employee who opened the premises at about 8.30am on Thursday.

He said the burglars broke into the store at about 3.30am the same day and carried off the safe containing some RM11,000 as well as various merchandise. KUCHING: The new bridge across Sarawak River here has been named the Darul Hana Bridge. Yang di-Pertua Negri Tun Abdul Taib Mahmud, who officially opened the RM35mil bridge at the Kuching Waterfront on Saturday, said ‘Darul Hana’ means a place of peace and tranquillity in Arabic. “Without this bridge, the beauty of Kuching will seem incomplete. The bridge connects the two parts of the city. The idea to build the bridge reflected what we saw in the olden days when we witnessed the beauty of Kuching,” he said. Also present were his wife Toh Puan Ragad Kurdi Taib, and Chief Minister Datuk Abang Johari Tun Openg and his wife Datin Patinggi Juma’ani Tun Tuanku Bujang. – Bernama A fatal lorry ride for boy

KOTA KINABALU: A mother will regret her decision to hitch a ride on a lorry laden with oil palm fruit with her young son, after the eight-year-old boy was killed when the vehicle overturned. Dias Aprianshah Irwanshah died of serious head injuries following the noon mishap near Kampung Ulu Maraba at the southwest Beaufort district on Saturday. His 35-year-old mother, Endang Susilawati, sustained head and body injuries, Beaufort police chief Deputy Supt Azmir Abd Razak said. The 39-year-old lorry driver was also injured when the vehicle overturned while negotiating a bend on a trip to a palm oil mill in Lumadan, nearby. 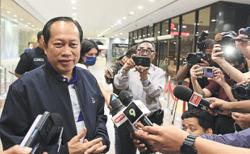