Finding beauty in helping others

The 54-year-old mother of four is an entrepreneur, activist for women’s development and active member of various organisations, including the Sabah Women Entrepre­neurs and Professionals Association (Swepa).

Due to her community work, especially the Barefoot solar project which saw three illiterate grandmothers from Sabah’s interior come out of their comfort zone and brought changes to their respective villages, Tambakau is one of the winners of the Star Golden Hearts Award this year.

But behind her success and will to help women is a story few people know.

Tambakau, who is married to a successful businessman and politician, comes from humble beginnings which helped mould her into who she is today.

It is also her past that drives her to do what she does for the community, especially women from poor backgrounds.

“I am of Baba Nyonya and Thai heritage, and the 11th of 12 siblings in my family,” she said. 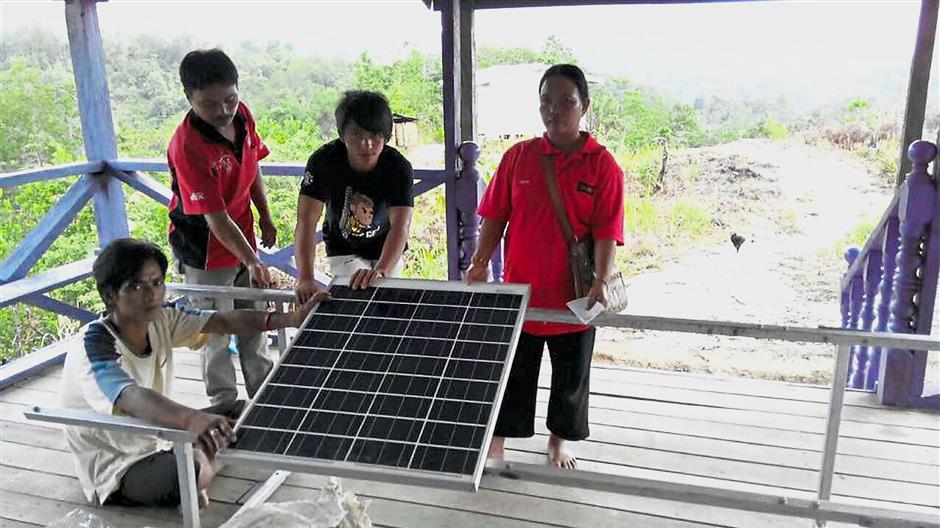 Productive project: A solar panel ready fo use in Sabah, thanks to Swepa’s Barefoot solar project.

“My father left us when I was five (in 1969) and my mother raised us all single-handedly.”

Tambakau described her late mother as a strong person who never gave up despite the hardships the family faced.

“She earned what she could for us by making nyonya kuih every day and never complained,” she said.

They lived in a tiny house in Ipoh. Since they did not have a car, Tambakau and her siblings had to walk to school, which was more than three kilometres away, every morning.

“All this made me stronger and it was my mum who taught us to always be humble, strive for the best and help others whenever we can,” she said.

Thinking about how her mother struggled to provide for them and still have a smile on her face every day inspired Tambakau to help others, especially women who do not have the opportunity to help themselves.

“I always admired her tenacity and inner strength, and she left a great legacy,” she said, adding that she wanted to do the same for her children and lead by example.

She said she wanted them to know the importance of living a life doing good for the community and leaving their mark.

As the organising chairperson of the Barefoot solar project, Tamba­kau said Swepa identified villages in the Kota Marudu district that had no electricity supply and women who could be persuaded to take part in the programme. Tambakau’s humble background drove her to help others.

“Our main challenge was to get these grandmothers to participate in the programme as they were illiterate, had never gone out of their village and could only speak their native tongue (Kadazandusun and other ethnic languages),” Tambakau said.

She said it took Swepa members a while to convince them that the projects were legitimate and that they would be well taken care of.

“After some time, they laid down their fears, put their trust in us to help them and left their homes,” she said.

The participants were required to undergo a six-month training prog­ramme at the Barefoot College in Rajasthan, India, where they mostly communicated via sign language.

“They do not understand English, let alone the Indian language, so what they could do was use sign language and other forms of communication methods, whatever worked,” Tambakau said.

The women learned how to fabricate, install and maintain solar-powered household lighting systems.

“They did not know anything about household lighting systems but they had the will to learn.

“They are brave women and the heroes of our people here,” Tambakau said.

The women finally graduated as solar “engineers” and brought their knowledge and expertise back home to install lights in their native villages.

More than 2,000 villagers from 200 families have benefited from this project since it was introduced in Sabah in 2013.

Tambakau said she hoped the women’s achievements could help inspire others, especially those who are less fortunate, to change their lives.

“Our lives and fates are not written. It is not fixed and it is up to us to change for the better,” Tambakau said.

“There is nothing we women cannot achieve if we put our hearts in it, get out of our comfort zone and learn new things.”