IPOH: Datuk Seri Dr Ahmad Zahid Hamidi (pic) has strong confidence that the Pangkor Dialogue 2017 would find a solid way of how future development can be done without over-zealous implementation.

The dialogue, which features a large-scale gathering of international and local dignitaries, academicians, investors and non-governmental organisation, has been an annual affair in Perak starting 2012.

"With the theme 'Making the Future: Innovative Pathways to Sustainable Development,' the dialogue hopes to achieve its goal in strategising a better development growth, not only in Malaysia, but in other regions as well," he said in his speech during the Pangkor Dialogue 2017 Awards Dinner here on Monday.

Dr Ahmad Zahid said the first participation of the United Nations Development Programme (UNDP) in this year's dialogue shows recognition to the importance of a global development network to international growth.

"With an array of distinguished speakers taking part in this dialogue, we must focus on optimising the UN's social development goals at state level together," he said, adding that it is crucial to work on finding an optimal pathway between innovation and sustainable development.

Dr Ahmad Zahid said the Pangkor Dialogue is unique in the sense that it is one of the few dialogues in the world that is promoted by a state government.

"This dialogue is also a platform where information is shared to find solutions for universal challenges faced by the region.

"These valuable insights provide a greater understanding of the issues at hand," he said.

"When people talk about Perak, there are many international events that people can associate with: Pangkor Dialogue, World Conference of Islamic Thoughts and Civilisation, Pangkor International Poetry and Folk Songs Festival and many more.

"We have seen how this state has become host to about 60 major events along the Perak Festival of Ideas.

"This is not only to promote the state but Malaysia in general. We have the ability to play host to any international conference, meeting, seminar and event.

"The SEA Games that just concluded is a testimony of how a major sports meet should be organised, and that we are ready for bigger events," he said.

During the dinner, several Perakian icons of the country received awards for their contribution and services, including national divers Cheong Jun Hoong and Leong Mun Yee, and cartoonist Datuk Mohammad Nor Khalid (Lat). 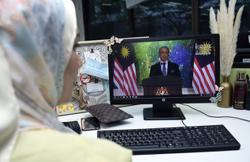