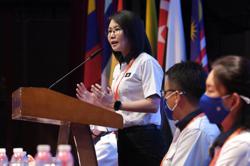 The three will be awarded the Darjah Kebesaran Seri Setia Mahkota (SSM), which carries the title “Tun”.

Chen, 85, had also served as the president for Dewan Negara while Samy Vellu, 81, is the Government’s special envoy to India and South Asia for infrastructure.

The King will also bestow the Darjah Panglima Mangku Negara (PMN), which carries the title “Tan Sri” to three individuals.

Among the recipients: (From left) Chen, Samy Vellu and Dr Sharifah Zarah are among those conferred titles by the King.

The King will also award the Panglima Jasa Negara (PJN) to 51 individuals. The award carries the title “Datuk”.

Koon, Ter and Ooi are among those conferred titles by the King.

To honour their contribution towards sports, five individuals will receive the Kesatria Mangku Negara (KMN).