The Urban Well-being, Housing and Local Government Minister said that Ipoh scored 97.45 in the local government authorities' rating system and also retained its five-star ranking when announcing the results on Monday.

In his speech during the state people's representative committee appointment and local government star rating ceremony at the Ipoh Convention Centre (ICC) here on Monday, Noh said that Manjung also made the Top 10 list.

He said that it scored 94.75 points, placing it in ninth position.

Noh, who only mentioned cities and towns in Perak, said Ipoh is a model for many cities in the country in terms of waste management.

"In 2008, Ipoh only got three stars but since then, they worked very hard to come to this level. Every year, their points improved and this year, they are ranked first in the country," said Noh.

The star rating system was introduced in 2008 and Ipoh only obtained three stars at the time.

In 2015, Johor Baru was ranked first but finished third in 2016 behind Ipoh and Penang. 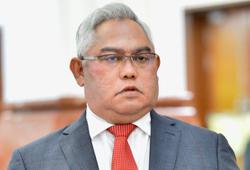 Covid-19: 653,531 individuals completed both doses of vaccine, says Health Minister
Man held after video shows him stepping on his kids and holding knife in Tawau
Home Minister: Govt to issue order on use of the word 'Allah'
Johor Maqis seizes 26 tonnes of maggot-infested cocoa beans
We are open to FTAs as long as it is a fair deal to us, PM tells industry players
Four police reports lodged over fake online banking site created by fraudsters
Carjacker detained by public in viral video
Three Bangladeshis nabbed for forging passports in Ampang
King congratulates Malaysian students accepted to study at Harvard College
Govt has no intention of imposing another nationwide MCO, says Muhyiddin