DPM: Language waiver for docs to be clarified

The Deputy Prime Minister said Health Minister Datuk Seri S. Subramaniam and Minister in the Prime Minister’s Department Datuk Joseph Entulu, who is responsible for the Public Service Commission, would explain the matter.

“This is to clarify the issue, which has become a controversy at grassroots level, especially among groups fighting for the national language,” he told reporters after visiting the Gawai open house of Sarawak Deputy Chief Minister Datuk Amar Douglas Uggah here yesterday.

Dr Ahmad Zahid was responding to reports that the requirement to pass SPM-level BM for medical graduates to be appointed for contract-based housemanship and compulsory service had been waived.

In the reports, the Health Ministry said it had asked the Public Service Department for the waiver and the department agreed to the request in February.

The Star reported that medical graduates with O-Levels had to take SPM-level BM to be accepted into permanent posts.

On Sunday, the Health Ministry said it would discuss with the Education Ministry and Examina­tions Syndicate to smoothen the process for medical graduates with O-Level qualifications to sit only for the SPM Bahasa Malaysia paper.

However, some medical graduates in Selangor said they were told to register for six core SPM subjects at the state Education Department, while those from some of the other states were required to take only BM and History.

Dr Ahmad Zahid said it was important to listen to the explanation from both ministers to clear up the issue.

“To me, this matter should be handled in an open manner,” he said.

He said that under the Govern­ment’s standard operating procedure, a pass in BM was compulsory for those who wanted to work in the civil service.

“But in this case, those involved are not permanent officers but contract staff,” he added.

National Union of Teaching Profession (NUTP) secretary-general Harry Tan disagreed with the decision to waive, adding: “It’s something that potential doctors will use with Malaysian patients and that’s why they have to be fluent in the national language.”

He said a higher condition should be imposed, like a credit and not a mere pass.

Umno International Alumni Club urged the Government to reconsider the waiver, saying that while it was brought about to attract more doctors on board, it could undermine the national language.

Pertubuhan Warisan Melayu Johor also opposed to the waiver, saying it was standing firm on the matter. 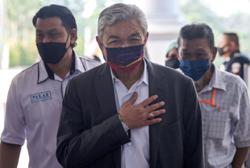